Shaw, who will play under Ajinkya Rahane for North Mumbai Panthers, was present in the audience along with members of all six teams.

“I saw Prithvi Shaw play in New Zealand (in the U19 World Cup). How he has progressed is remarkable”, said Tendulkar at the opening ceremony of the inaugural T20 Mumbai League here today.

Shaw, who will play under Ajinkya Rahane for North Mumbai Panthers, was present in the audience along with members of all six teams taking part in the tournament starting tomorrow at the Wankhede Stadium.

Tendulkar, named the brand ambassador of the league, said the tournament will provide an ideal platform for young players and experienced ones to express themselves.

“To me this tournament is the ideal platform for cricketers to express themselves. All sportsmen look for recognition and appreciation and this league will provide them the opportunity. This league is really important for Mumbai cricket”, said Tendulkar.

The league’s Commissioner, Sunil Gavaskar, and mentor Dilip Vengsarkar, both former Mumbai and India captains, were present at the event, along with former Test players Sandeep Patil and Vinod Kambli, mentors of two of the teams. 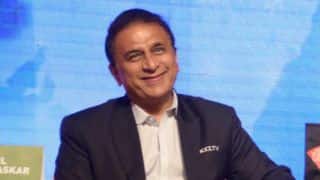