Sachin Tendulkar launched his video game on cricket named Sachin Saga Cricket Championship for android and iOS on December 6. The game has 1 million downloads and an overall rating of 4.2 stars. In terms of game play, graphics and controls the game has been rated on an average of four stars.

JetSynthesys, the developer of the game has kept it simple and easy to play. However the game is not very impressive and has few bugs, the developers have promised to improve it in the next update by commenting on almost every review on play store.

The game includes many legendary players like who have retired long back. The surprising fact is that Virat Kohli, India s run machine has the same ranking as Sachin Tendulkar in the game. Kohli is now recognised as someone who can go pass Tendulkar in terms of record.

The rating of both the players in batting is 195, only Don Bradman has a higher ranking that of 200. It is a very respectful gesture of Tendulkar to rank Kohli at par with him. 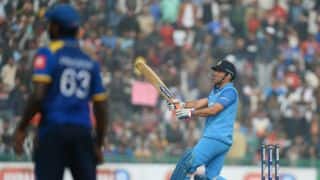