The English media saluted Sachin Tendulkar, who has announced retirement from Test cricket next month, describing him as a "superhero" and compared him with the likes of football legend Pele and tennis superstar Roger Federer in greatness in his field. 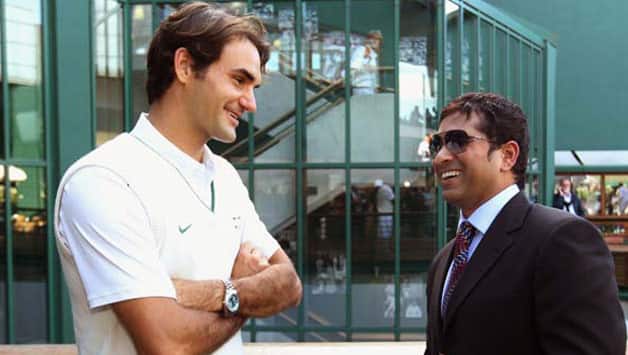 Roger Federer (above) has always expressed his admiration of the maestro. The two even met during the 2011 Wimbledon © Getty Images

The English media saluted Sachin Tendulkar, who has announced retirement from Test cricket next month, describing him as a “superhero” and compared him with the likes of football legend Pele and tennis superstar Roger Federer in greatness in his field.

All the leading newspapers here paid glowing tributes to the iconic batsman as someone who strode on a cricket field like a colossus and said the game will miss a player who has “superhuman” achievements.

In his column for the The Times, former England captain Mike Atherton described Tendulkar as the “superhero for our times” and wrote about the adulation he received from the fans in cricket-mad India.

Describing Tendulkar as “superhuman” for having almost all the cricketing records in his name, tabloid ‘Mirror’ compared him to legends of other sports in greatness.

“In cricket, only Sir Don Bradman’s average of 99.94 or Brian Lara breaking the world record twice — which was like man walking on the moon and then landing on Mars 10 years later — come close to Tendulkar’s century of international hundreds and double century of Test caps for superhuman endurance,” the newspaper said.

“Never has a cricketer been as venerated, if not actually worshipped, by his own people.”

A write-up in the Guardian newspaper said considering the burden of expectation of one-billion people he had to carry, Tendulkar’s achievements dwarfs those of all his contemporaries.

“Tendulkar has around a billion of them (fans) … shows the size of the burden he has laboured under. No one, in any sport, has performed so consistently, under such pressure, over such a long period of time. By that measure, the margin between Tendulkar and the rest is as wide as the gap between Bradman’s batting average and the next best,” the newspaper said.

Calling Tendulkar a global superstar, a SkySports writer said what sets Tendulkar apart from the other greats of his era was his record all over the globe.

“He averaged over 40 in every nation, thriving against the all-conquering Australia team, posting 11 centuries and 16 50s in 39 matches against the Baggy Greens.

“His retirement as long been on the cards since that magical moment and with all nations conquered, 100 international hundreds and 200 Test matches under his belt, he and bowling attack across the globe can finally sleep easy.”

A report in The Independent quoted England pace spearhead James Anderson as expressing “awe” of Tendulkar.

“He’s one of the best I have ever bowled at, definitely.” You can be standing at mid-on watching him bat and you’re in awe, I know you shouldn’t be when you’re on the field, but you could tell he was very, very special at what he did,” Anderson said.

“Any time you get someone who is classed as one of the greats — like Ponting or Lara — it does feel a little bit more special,” he added. “Every time I got him out I got that feeling.”