Former India captain Rahul Dravid knew that the time for Sachin Tendulkar to draw curtains on his long and illustrious career was quite close but he had no inkling that the veteran would decide to call it quits with the home series against the West Indies next month. Former India captain Rahul Dravid knew that the time for Sachin Tendulkar to draw curtains on his long and illustrious career was quite close but he had no inkling that the veteran would decide to call it quits with the home series against the West Indies next month.

“You knew that it was going to happen sooner rather than later. There were indications that he would finish it but he would finish that with the West Indies tour, I did not get that inkling,” said Dravid.

Tendulkar, regarded the greatest batsman in contemporary cricket, Thursday called it quits from Test cricket, announcing that he would retire after his 200th match which would come against the West Indies, bringing the curtains down on an extraordinary career spanning a marathon 24 years.

Struggling with form for the last two years, the 40-year-old Tendulkar, who has scored a monumental 15,837 runs in 198 Tests at an average of 53.86, informed the Board of Control for Cricket in India (BCCI) about his decision to retire from Test cricket, putting an end to the intense speculation about his future.

Dravid said Tendulkar chose the perfect time to bid adieu to the game given that his last Test will be his 200th overall.

“It’s been a great career, a great opportunity for him and for the whole of India… these two matches to recognise what he has done. I think it’s a great time for him to go, in a sense the 200th Test match. It’s a great occasion for him playing in his 200th Test, probably in Mumbai and in front of his home crowd. It’s fantastic for him,” Dravid told ESPNCricinfo.

Dravid, who retired from international cricket last year after amassing 13,288 runs in 164 Tests and another 10,889 in 344 one-day internationals, said it’s very hard to arrive at a decision like this and Tendulkar must have known from his heart.

“It wouldn’t have been easy for him. He must have known from his heart. He had gone by what his heart told him. You take a lot of advice from family, people who are close to you. But in the end, it’s your call and it’s been Sachin’s call. I was just speaking to him and he seemed comfortable with the decision he made. It’s hard to explain these things like how you arrived at such decisions.”

“It’s just that you feel like that the time is right for you. Sometimes you take a little bit longer to confirm your feelings deep down. Ensure that it’s not an emotional decision which you have made. Once you know, then it becomes easier for you. You know you don’t have that same energy and drive to keep going. Someone, who has played with the passion that he has, the energy that he has, he would have known that he can’t carry on,” Dravid said.

The 40-year-old Dravid felt the Indian team’s young cricketers will lose out on some inspiration with the absence of Tendulkar in the dressing room.

“A young cricketer will lose the inspiration. He loses the opportunity to share a dressing room with Tendulkar, a living legend. It was for me, I was seven years junior to him as a player and just getting into the dressing room and putting your kit bag next to Sachin meant something. It was an inspiration in some level.

Dravid, one of India’s greatest batsmen himself, said Tendulkar, as a teammate, was always approachable and remained grounded despite his ‘superstar’ tag.

The way he presented himself shows that Indian cricket could achieve a lot, grow around him. He helped Indian cricket have a successful period for the last decade and a half or so.” 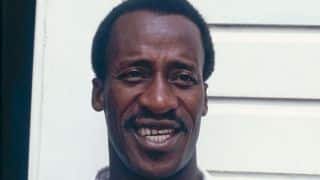 Vanburn Holder: An excellent supporting act to the genuine quicks of his era