Recently-retired Indian batting legend Sachin Tendulkar on Friday said he was not too comfortable with the idea of having a computer in the dressing room but came to accept the device after realising how important an aid it was to plan and strategise better.

Recently-retired Indian batting legend Sachin Tendulkar on Friday said he was not too comfortable with the idea of having a computer in the dressing room but came to accept the device after realising how important an aid it was to plan and strategise better.

“I had already played for India for 12-13 years. This was in 2002-03, when computer was brought to our dressing room. We were told that computer is going to store all the data and you will have access to whatever you want to see. I asked what is the computer doing in the dressing room?” he recollected at the Aviva Life Insurance’s ‘what’s your big plan’ event.

“Computer is not going to bat for me, it is not going to bowl for Zaheer Khan or Harbhajan [Singh]. But Over a period of time I realised that the data stored was accessible within seconds. If I wanted to see how I batted in Australia in 1999, in year 2007, it was available in five seconds.

“Things have become different. It has helped us plan better against the opposition, whatever their weaknesses or strengths are, it has helped us. It is just about exposure and with time you learn to accept all these things. It has become a way of life for us,” he said.

The batting icon interacted with children and encouraged them to follow their dreams and work towards realising them.

He added that the level of satisfaction he got from playing cricket cannot be compared with anything else.

“Just be true to yourself. Don’t try and fool around. It is important that you take life seriously. Yes, you need to enjoy. I played cricket for so many years, I had lot of fun. I enjoyed doing what I wanted to do in life. It gave me the kind of satisfaction which cannot be compared with anything else,” he said.

Talking about his own kids, Tendulkar said his daughter Sara wants to be a doctor while his son Arjun is passionate about cricket.

“I have always told my children they should become what they want to be in life and they will have our full support. My daughter wants to become a doctor which is a fantastic thing. I am glad she is following her mother’s footstep. My son, he is passionate about cricket,” he said.

Tendulkar, the first sportsperson to be conferred with the Bharat Ratna after being a top cricketer for 24 glorious years, said people have become liberal in career choices and are encouraging kids to venture into unconventional territory.

“Things are changing and with time, thinking has also changed…20 or 30 years back, how many parents would have want their child to become a chef. Today we have seen fantastic programmes on television where children are cooking and it is fantastic to watch,” he said.

The 40-year old advised children to persist with their dreams and not give up.

“Something you have got to remember in life, whatever you want to be in life, the journey is never going to be smooth all the time. There are going to be rough patches along the way but then you prepare yourself in such a manner that if any obstacle comes in your way, you are following the right path always.

“If you are on the right path, nothing can stop you. All you need to have self belief and determination and things will change. You can’t be stopped at a red signal forever. Wait for your opportunity and don’t give up,” he said.

“For me big plans start with a B. B is belief. You have got to believe in what you want to be. And above all, you need to realise your passion in life and then you have got to fall in love with your passion. For me, I was passionate about cricket and I fell in love with cricket. I didn’t think of anything else. All I wanted to do was go out there and try my best,” Tendulkar said.

“I would move to I — ignoring all the distractions. For a young child, it is but natural that you are going to have birthday parties, you would want to watch movies…For me, to stay away from distractions was really important. I wouldn’t call it a sacrifice because I thought I was doing something I really enjoyed.

“The third one is G — giving your best all the time. It doesn’t matter who your opposition player is, it doesn’t matter you play on which ground. For me I didn’t need an external factor to motivate me. The ultimate dream was to play for India. I just thought of giving my best all the time and leave the rest to the almighty. That was my plan and try and keep things simple. The more you complicate them, the more complicated they will get,” he said.

He told the kids to be serious about what they want to do and remain focussed.

“I dreamt and I chased my dreams. It applies to each and every child. There comes a stage where you have to become serious in life. You have got to dedicate, you need to have discipline, you need to have focus and if you want to succeed there has to be consistency in your concentration level.

“Your concentration level cannot have dips for a long period. There are professions where you need to switch on and switch off. But someone like a doctor, who is in the middle of the surgery, you cannot switch off,” he said. 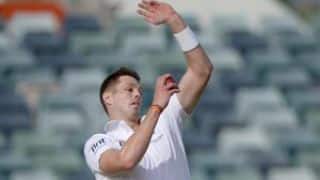