Sachin Tendulkar's intensity shoots up to 200 per cent ahead of matches against Pakistan: Suresh Raina

Sachin Tendulkar's intensity shoots up to 200 per cent ahead of matches against Pakistan: Suresh Raina

It's no secret that Sachin Tendulkar meticulously goes about preparing himself before every international match but ODI specialist Suresh Raina revealed that the intensity and fierce competitiveness reaches 200 per cent when he is competing against arch-foes Pakistan. 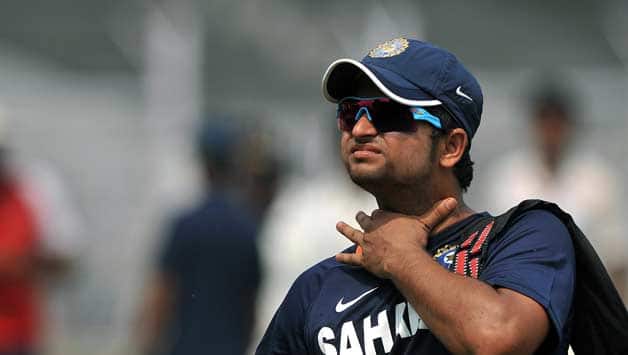 It’s no secret that Sachin Tendulkar meticulously goes about preparing himself before every international match but ODI specialist Suresh Raina revealed that the intensity and fierce competitiveness reaches 200 per cent when he is competing against arch-foes Pakistan.

“His intensity reaches 200 per cent against Pakistan. I remember when we were playing our world cup semi-final against Pakistan in Mohali, we all were tense. It was a high-voltage match for us with Prime Ministers of both sides present. The body language of players on both the sides was aggressive.

“After the toss, paaji [Sachin] had told every player to remain focussed on the job. He said ‘the wicket is good and our record against Pakistan in world cup is perfect’. He had a meeting with the batsmen and fielders as our fielding unit was very strong. Paaji told us ‘let’s trouble them, they don’t perform when put under pressure’. This showed his intensity,” said Raina during ‘Salaam Sachin’, an event organised by the India Today Group in honour of the iconic batsman.

Raina said it was amazing to see the same kind of hunger in Tendulkar during the 2011 World Cup as he first showed way back in 1989 during his Test debut.

“He was keen to win the world cup. When we were playing the final (against Sri Lanka), we did not get a good start and players started roaming around for tea and snacks. At that time, paaji told everyone to be seated and watch the match.

That shows his involvement. When we won the world cup, and the way his family, fans and the whole of Mumbai rejoiced, it was a touchy moment for every player. Paaji became so emotional after winning it. It showed how much desperate he was to win the Cup,” Raina recalled.

Another ardent admirer of Tendulkar and his longtime teammate, pacer Javagal Srinath also paid rich tribute to the legendary batsman and recounted many indelible moments.

“One thing which I liked about Sachin, he was so tightfisted with his compliments. He would never compliment you so easily. It’s quite tough to get a compliment from him. If at all you want to know what he has said about you, it could be from others,” said Srinath.

“They would come to you and say ‘look Sachin was telling us you batted well or you bowled well’. That’s the compliment which you look up to.

“That was a good part about his captaincy also. It really raised the level in many of us. Bottom line is you got to impress your captain, you got to get that confidence from your captain. He was tough in those matters. That’s something which I really admired,” Srinath added.

He said Sachin was simply the best in all conditions and had a wonderful observation against all types of oppositions.

“In Cape Town in 1996, Sachin got a brilliant 100 along with Azharuddin. I had bowled many overs and [Venkatesh] Prasad got injured. I was tired. I walked in to bat, he was batting at the other end, my right leg was looking for the leg umpire, you know what I mean because Allan Donald was bowling at the other end.

“After the match, Sachin told me ‘Look Sree, I don’t like it. You were running away from the stumps’. I had to accept it. He said ‘Look I need more commitment from you’. Then in the next match, I got some 43 runs, I stood at the stumps and took few blows,” revealed Srinath.

Srinath also recalled India’s 1996 World Cup semi-final match against Sri Lanka in Kolkata, which was abandoned after the Indian fans turned rowdy when chasing 252, India slumped to 120 for eight. Sri Lanka had advanced to the final.

“It was a sad game for us and we all were emotional. After the match, I saw 4-5 players crying. When people cry, it’s contagious and if I don’t cry, it would look like ‘my commitment to the game is less’. So, even, I started crying.

“I looked at Sachin, he wasn’t crying. I walked up to him and he told me ‘I cannot cry. Why should we cry. We played the game with conviction and we lost it. It’s not the end of the world for us. Crying business, it’s something which I don’t like’. A strong line what he said. These thing you learn from people like him.” .