Sachin Tendulkar's son Arjun is in love with cricket

Sachin Tendulkar's son Arjun is in love with cricket

Cricket legend Sachin Tendulkar says his 11-year old son Arjun is in "love" with cricket, which 'starts from heart and then travel up to brain when you grow up'. 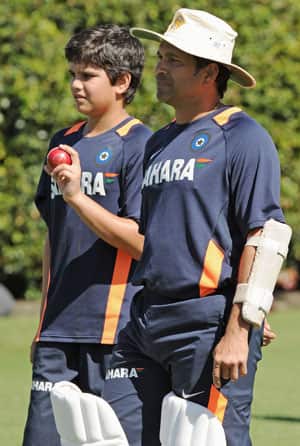 Cricket legend Sachin Tendulkar says his 11-year old son Arjun is in “love” with cricket, which ‘starts from heart and then travel up to brain when you grow up’.

Tendulkar said it was his son’s own choice to start playing cricket and nobody forced him into the game. He want Arjun to enjoy being on the field instead of thinking about the number of hours he has practised.

“As long as he is in love with cricket, it’s fine. Then you don’t look at your watch or count the number of hours you’ve practiced. It’s the sheer joy and satisfaction of being on the field. And that’s what I want [for him].

“I believe cricket starts from your heart and then it travels up to your brain as you grow older. First you have to be in love with the game, and my son is in love with cricket,” Tendulkar said in an interview to TIME magazine.

Tendulkar said it is “unfortunate” that he cannot take his kids out for normal things like evening walks, so he looks forward to holidays with his family.

“In Mumbai, if I had to go out and be a normal father, it’s not possible. We go on holidays and that is the time when I look to spend as much time with them as possible.”

He said he plays with his son in Mumbai in a “controlled environment.”

Tendulkar said he has passed on to his children the advice his father gave him that ‘while cricket would be temporary in their lives, they should always try and be good people. So try and be a good person’. People will appreciate that even after you’ve stopped playing. I try and tell my children the same thing.” (PTI)

Kevin Pietersen 'sick and tired' of justifying participation in IPL 2012