Tendulkar shed light on the ICC World Cup 2003 clash against Pakistan at Centurion.

New Delhi: Sachin Tendulkar was part of all previous Cricket World Cup clashes against Pakistan. India had emerged victorious in all five of them. After retirement, Tendulkar reflects on the pressures and joys of playing arch-rivals Pakistan at Cricket World Cups.

Tendulkar believes matches against Pakistan have always an extra edge to them, owing to the history shared by the two-twins who were separated at birth, According to an interview with Headlines Today, Tendulkar was quoted saying,

“The interest levels of people start a year before the start of the tournament. People tell us that this is a match we need to win, whatever happens later, we do not care. fortunately we do not think that way.”

Tendulkar shed light on the ICC World Cup 2003 clash against Pakistan at Centurion,

“I don’t think there was a better World Cup match that I have been a part of.” But Tendulkar reckons the ICC World Cup 2011 final was a different ball game altogether. “The post-match celebrations, talking to all my family members and friends, the whole of India was celebrating that match.”

Tendulkar talks humbly about upper-cutting the fastest bowler in the world for a six, “That ball was released at 150 kms and a batsman does not have enough time to plan and play a shot like that.”

Tendulkar maintained that there is mutual respect in both camps for each other, “We are not enemies off the field. When we play each other, we compete, we want to win. It does not matter that Wasim Akram is a friend or not. I think it is the same thought process in their dressing room as it is in ours. “We respect each other as individuals off the field.”

Tendulkar talked about experiencing world class bowling for the first time in his life, “I hadn’t faced that kind of bowling, that kind of pace, that kind of hostility, that kind of skill to bowl late reverse swing. After my first test, I thought it was too tough for me. I spent a lot of time talking to my seriors, Chandu Borde, Ravi and they advised me that I need not rush. You need to give yourself time. In the next innings, I realised that I could deal with it. But then Waqar hit me on my nose and in those days I did not wear a helmet with a grill. Post that I started wearing a grill. But I did not want to leave the battlefield as that would have put on tremendous pressure on us.”

Tendulkar further reveals his experience of playing Pakistan and his troubles against the dibbly-dobbly, wibbly-wobbly bowling of Hansie Cronje, “I realised that you get a sore throat playing a match against Pakistan because you cheer so much. You cheer and shout at every ball to make things difficult for them. We are not sledging, just making it tough for their batsmen. It was a tough team under the leadership of Imran Khan, with Miandad and Wasim Akram”

Tendulkar reminisces about carting Abdul Qadir to all corners of the park in one particular over, “Qadir challenged me because I hit Mushtaq for a couple of sixes and a boundary. Qadir said, ‘bacchon ko kyun mar raha hai. Hit me, I will bowl to you. And in the following over, I hit 27 or so runs on Quadir’s bowling.”

Tendulkar also reflected on the pressure of facing Pakistan in the ICC World Cup 2011 semi-final at Mohali,“It was definitely the most high-pressured game of my life. It was a different kind of a feeling,  hard to explain what it is.” 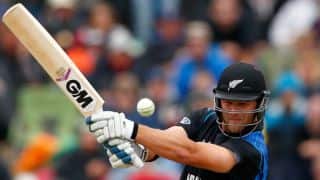