In a rare spectacle, batting greats Sachin Tendulkar and Ricky Ponting on Monday, found themselves training for the same team with the former Australian captain glued to the batting grind of his Mumbai Indians team-mate ahead of their side's IPL campaign. Sachin Tendulkar spent the longest time at the nets, with Pragyan Ojha and Harbhajan Singh bowling to him in tandem © PTI

In a rare spectacle, batting greats Sachin Tendulkar and Ricky Ponting on Monday, found themselves training for the same team with the former Australian captain glued to the batting grind of his Mumbai Indians team-mate ahead of their side’s IPL campaign.

Tendulkar, who had struggled in the recent home Test series against England and Australia, had a two-hour long batting stint at the National Cricket Academy here with captain Ponting keeping a close watch on him ahead of MI’s IPL campaign opener against Royal Challengers Bangalore on April 4.

Tendulkar spent the longest time at the nets while Ponting, Rohit Sharma and Dinesh Karthik batted for under 45 minutes.

A padded up Tendulkar faced the throwdowns with straight bat for nearly 20 minutes on the NCA centre pitch, while Ponting exhibited his array of strokes, including his trademark pull shots.

Once Ponting decided to wind up, Tendulkar, wielding two different bats, slipped into the nets and faced Harbhajan Singh and Pragyan Ojha who were bowling in tandem. The veteran batsman concentrated on playing more with the straight bat on either side of the wicket.

Occasionally, he unleashed his trademark shots like backfoot punch and hoick over square-leg fielder. He also constantly chatted with Harbhajan and Ojha.

While Tendulkar was playing his strokes at the nets, Ponting was studiously watching the veteran Indian bat for close to an hour, a spectacle which turned out to be a treat to watch for those present.

Ponting was also seen having animated discussions with Harbhajan and other team-mates and MI chief-mentor and former India captain Anil Kumble.  After facing the likes of Harbhajan and Ojha, Tendulkar picked up his other bat and walked up to the adjacent net to face club bowlers. While his teammates took some time to rest, he went on knocking the balls.

On the other corner, Karthik faced the throwdowns on the concrete pitch focusing to get his cover drives and short-arm pull shots right.

Rohit padded then up and faced the throwdowns on the centre pitch to test his wrist-work on either side of the wicket.

Shahrukh Khan will be at Wankhede in spirit, if not in person: Venky Mysore 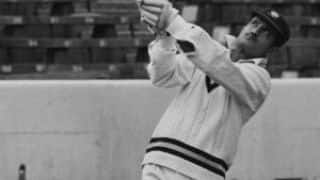 Ajit Wadekar: The man who led India to her first-ever series wins in the West Indies and England