Tendulkar had fallen to a number of controversial umpiring calls by Bucknor during his international career, including during his 99th Test at Eden Gardens against Pakistan in 2005.

A Master Blaster on the cricket field, Sachin Tendulkar stole the show online when he made a witty response following the ICC’s attempt to troll the batting great.

In a video posted on Twitter, Tendulkar could be seen practicing at the nets along with his former teammate and childhood friend Vinod Kambli at the Tendulkar-Middlesex Global Academy camp in Navi Mumbai.

“Felt great to be back in the nets with Kambli during the lunch break! It sure took us back to our childhood days at Shivaji Park Very few people know that Vinod & I have always been in the same team and never played against each other,” Tendulkar had written few days ago.

The video showed Tendulkar overstepping while bowling his trademark leg spin to Kambli.

The official ICC Twitter handle took notice of the tweet and, in a lighter vein, tried to troll him. “Watch your front foot, @sachin_rt ??,” the ICC wrote with a picture of former umpire Steve Bucknor.

In response, Tendulkar wrote: “At least this time I am bowling and not batting?? .. umpire’s decision is always the final. ???.”

Tendulkar had fallen to a number of controversial umpiring calls by Bucknor during his international career, including during his 99th Test at Eden Gardens against Pakistan in 2005. 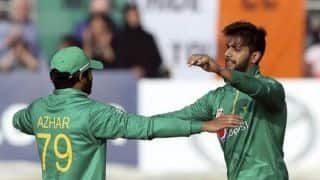