Sachin Tendulkar: T20 in USA is an ideal opportunity to globalise cricket

Sachin Tendulkar: T20 in USA is an ideal opportunity to globalise cricket

'Sachin's Blasters' will take on 'Warne's Warriors' in a three-match T20 series.

New Delhi: Sachin Tendulkar says he wants to promote cricket in the United States by engaging the huge South Asian diaspora there through the T20 series for former stars in his endeavour to globalise the sport. Come November 7, ‘Sachin’s Blasters’ will take on ‘Warne’s Warriors’ in a three-match T20 series ‘Cricket All-Stars Series 2015’ in New York. The other two matches will be held in Houston and Los Angeles on November 9 and 11. “During last year’s MCC bicentenary match at Lord’s, I realised that all of us, I mean the former cricketers still have a lot of passion left. We realised that crowds still come and fill up the stadiums when we play. Then I felt that we could continue with our passion and also promote cricket in different parts of the world,” Tendulkar told PTI during an exclusive interaction today. Sachin Tendulkar, Shane Warne to play T20 cricket in USA in November

While there has been an official ODI game between New Zealand and West Indies, played at Florida, the United States remains an unchartered territory for cricket even as the likes of Tendulkar, Shane Warne, Curtly Ambrose, Ricky Ponting get ready to enthrall their fans in this part of the world. Asked if Tendulkar’s presence will open the American market for Indian cricket, his response was a cautious one. Shoaib Akhtar: India don’t have wicket-takers except Ravichandran Ashwin

“I don’t know whether it will open the market for India but the basic idea is to get the locals excited and get them involved with the game of cricket. This is an ideal opportunity to globalise the game. It gives us opportunity to take cricket in the United States,” Tendulkar said. Asked about the famous Sachin Tendulkar-Sourav Ganguly combination opening the batting against Glenn McGrath and Curtly Ambrose, Tendulkar laughed and said, “That is precisely the idea of these matches. I have so many friends in the United States and there are so many people who are cricket fans. However, many of them have never got a chance to watch us live in action. India must strive to improve: Sunil Gavaskar

“Many of friends would travel to India to watch me play, but this will give an opportunity to all of them to watch all these superstars live in action,” said Tendulkar. Not someone to take even exhibition games lightly, Tendulkar has started light training and he intends to build it up as time progresses. “Well, I haven’t started practising with that intensity but it is a slow start. I gradually plan to build it up,” he sounded as focussed as ever as he gets ready for some intensive net session at the Bandra Kurla Complex in Mumbai. When asked if he would train with the Mumbai Ranji team, he explained, “No, it would be wrong to disturb Mumbai Ranji team’s training schedule. Also I need to do T20 specific training and they are playing Ranji Trophy. But yes, I would love to be around the Mumbai Ranji team,” said the maestro. Glenn Maxwell can be the best in the world: Aaron Finch 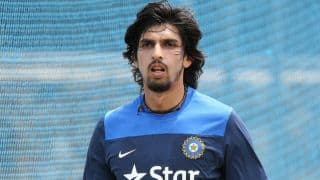