He is the sixth Indian to be inducted into the ICC Cricket Hall of Fame.

“Humbled and happy to be inducted into the #ICCHallOfFame. A lot of people have contributed towards helping me become who I am today. A big thank you to my family, friends & fans across the globe for the love & support. Congratulations to Cathryn Fitzpatrick & @AllanDonald33,” he tweeted.

Tendulkar, who retired in November 2013, tallied 15,921 runs in Tests and 18,426 in ODIs, both of which remain records. He is the sixth Indian to be inducted into the ICC Cricket Hall of Fame.

“It is an honour to be inducted into the ICC Cricket Hall of Fame, which cherishes the contribution of cricketers over generations. They have all contributed to the growth and popularity of the game and I am happy to have done my bit,” the 46-year-old had said at the induction ceremony which took place on Thursday.

Donald, known as the ‘White Lightening’, was arguably Proteas’ fastest bowler ever and finished with 330 Test and 272 ODI wickets. He is one of the players credited with South Africa’s success in the game after their return to international cricket in 1991.

ALSO READ: ‘The biggest shock’ – Allan Donald after being inducted into ICC Hall of Fame

Fitzpatrick, the eighth woman to win the award, was the fastest bowler in women’s cricket for a period of 16 years, ending her career with 180 wickets in 109 matches, a record then. She helped Australia win two Women’s World Cups and finished with 60 wickets in 13 Tests.

ICC Chief Executive Manu Sawhney said: “Sachin, Allan and Cathryn are three of the finest players to ever grace our game and are deserved additions to the Hall of Fame.” 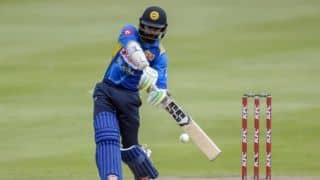