Sachin Tendulkar was a picture of humility as he celebrated his 40th birthday with a brief cake-cutting ceremony at Kolkata, thanking his legions of fans for their "unconditional love" in a cricket career spanning over two decades. 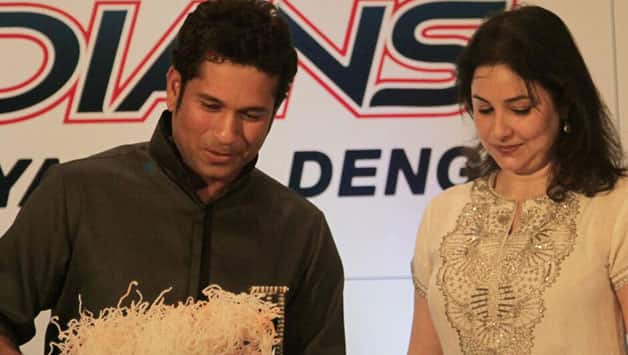 Sachin Tendulkar was a picture of humility as he celebrated his 40th birthday with a brief cake-cutting ceremony at Kolkata, thanking his legions of fans for their “unconditional love” in a cricket career spanning over two decades.

The Mumbaikar, who would be seen in action during an IPL match for his team Mumbai Indians against the Kolkata Knight Riders later on Wednesday night, made a brief statement to the media before cutting a cake.

“Let me take this opportunity to thank all the people in India and well wishers all over the world who have supported me and showered me with unconditional love,” said the veteran, whose wife Anjali was by his side during the ceremony.

“It has been really special and it is because of their good wishes that I am standing here,” he added.

Tendulkar said he wanted to thank each one of his fan personally for supporting him for over 24 years.

“Since I can’t do that, it is a good opportunity to thank the every little thing that they have done for me, like fasting for me during injuries. I just wanted to say thank you,” he said.

Tendulkar got the first bite of his birthday cake from Anjali’s hands who giggled after being called from the backstage by the batsman on the insistence of the present journalists and photographers.

“Now, don’t ask her to put it on my face next,” joked the veteran cricketer.

Earlier, the Cricket Association of Bengal celebrated Tendulkar’s birthday a day in advance by cutting a 10-pound cake in the presence of 100 blind students.

The blind students from Narendrapur Ramakrishna Mission Blind School and Light House for the Blind cut the cake in the evening.

In a career spanning 24 years, Tendulkar has got almost all the batting record to his name other than Brian Lara‘s Test highest of 400 not out.

Tendulkar, who has called it quits from the ODI format to prolong his Test career, has a colossal 18426 runs from 463 matches with 49 hundreds at an average of 44.83.

In the leading run-getters list of Test matches, Tendulkar is sitting on 15837 runs with 51 hundreds, way ahead of South African veteran Jacques Kallis who with 13128 runs is the only playing batsman to be in the race at fourth place.

Tendulkar has played only one T20 for India as he has limited his Twenty20 ambition to his franchise Mumbai Indians in the IPL.

Sachin Tendulkar at 40: Nothing left to prove, no more worlds to conquer, all missions accomplished