Sachin Tendulkar on Monday in a grand manner welcomed the star Indian cricketer Yuvraj Singh, who returned to the country this morning after a three-month long treatment for germ cancer in US. 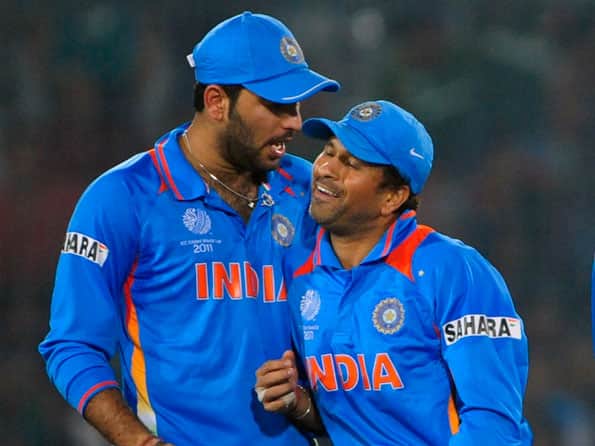 Sachin Tendulkar on Monday in a grand manner welcomed the star Indian cricketer Yuvraj Singh, who returned to the country this morning after a three-month long treatment for germ cancer in US.

“Yuvi- Get well soon. Welcome back home my brother after winning a tough battle with cancer,” the Little Master wrote on his Twitter page.

Received by his mother Shabnam at the Indira Gandhi International Airport in New Delhi, Yuvraj came on a British Airways flight Monday morning after spending some days in London to recuperate from the after-effects of the chemotherapy.

His head, which went bald during the treatment, was covered by a red sports cap. Wearing a red T-shirt teamed with Khaki pants, Yuvraj made his way through hordes of fans and waiting media personnel after coming out from back gate of the airport.

Flashing a victory sign and a smile, the 30-year-old walked through patiently towards a white Audi SUV, which drove him to his home in North Indian city of Gurgaon from the airport.

“It (the cancer) is completely out of his system and he is better now,” a friend who was with him London during the treatment said.

Yuvraj got a morale-boosting visit by his idol Tendulkar while he was recovering after his treatment in a US hospital for a rare germ cell cancer.

The two met for an hour at an apartment of Yuvraj’s friend here yesterday. Yuvi, as he is fondly called by his fans, got a warm embrace from Sachin and the two posed for photographs.

Sachin also wished Yuvraj a speedy recovery and an early return to the game.

Yuvraj’s fondness for Tendulkar is well-documented and the left-hander dedicated his 2011 World Cup Player-of-the-Tournament to the senior batsman.

During the treatment in Indianapolis, Yuvraj had been paid a visit by former India spinner Anil Kumble.

Yuvraj was discharged from the hospital on March 18 after completing the third and final cycle of chemotherapy to recover from his illness.