"Yes, everything is fine between us and I'm happy with it. We hugged each other. We want to tell people that we're back." - Kambli

Sachin Tendulkar and Vinod Kambli, childhood friends of the 664-run stand fame, have decided to let bygones be bygones. The strangled relation between these two cricketers has come to an end. This all transpired at a book launch hosted by Rajdeep Sardesai.

Speaking to The Times of India, Kambli said: Yes, everything is fine between us and I m happy with it. We hugged each other. We want to tell people that we re back. The duo s friendship has taken for the worse in recent times. It was said that for the last seven years they haven t met each other. They have only exchanged some text messages during recent times.

It had all gone down south after Kambli in a TV interview in 2009 said that Tendulkar could have done more to keep Kambli s place in the Indian side.

Tendulkar had scripted his way into the Indian team at the age of just 16 in 1989 against Pakistan with Kambli following in his footsteps two years later. Kambli arrived some years later, and became the third cricketer (after Don Bradman and Wally Hammond) to score double-hundreds in back-to-back innings. Unfortunately, he faded away. 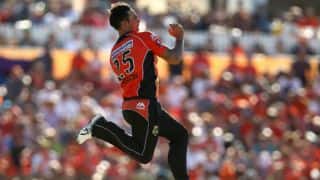