It might seem to be an unconquerable feat but Sachin Tendulkar believes either Virat Kohli or Rohit Sharma will break his record of 100 international centuries. 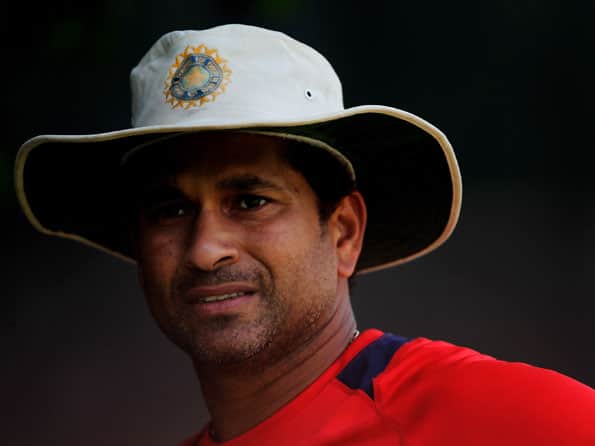 Sachin Tendulkar said as long as an Indian breaks his record of 100 tons in international cricket, he doesn’t have any problem Getty Images

It might seem to be an unconquerable feat but Sachin Tendulkar believes either Virat Kohli or Rohit Sharma will break his record of 100 international centuries.

Tendulkar(39) made his prediction at a lavish bash thrown by industrialist and his IPL team Mumbai Indians’ owner Mukesh Ambani to felicitate him for completing 100 international tons after actor Salman Khan lobbed a question.

Salman’s speech peppered with humour was the high point of the event where he goaded Tendulkar into predicting who he thinks will break the seemingly unshatterable record.

“Kya lagta hai aapko? seedhe seedhe bolo nahi tod payega (what do you think of this, ok say that no one can do it),” the Bollywood star said.

Unable to control his laughter, Tendulkar rose from his front-row chair and said, “I think those who can, are sitting in this room only.”

“I can see those youngsters. Virat and Rohit are the ones. As long as an Indian breaks it, I don’t mind,” said Tendulkar, drawing a round of applause from the celebrity guests.

Salman while referring to Tendulkar’s feat said, “I hope, this record is broken very soon because records are meant to be broken…Sachin yaar, how does it feel to be praised all the time? Don’t you feel that ‘ok, I know all this, that’s enough’.” This remark left Tendulkar and everyone around him in splits.

The actor didn’t stop at that and much to everyone’s amusement said, “how about 200 buddy, how’s that? 100 are already there, another 100, how much time does it take?”

Then came the googly that had the entire gathering in laughs, “It’s been heard that it’s impossible to break Sachin’s record and it’s not Don, it’s me who is saying this.

I can say this because my father wrote this film. Amit ji (Amitabh Bachchan) acted in it.”

Addressed as ‘Sachin Sir’ by the evening’s master of ceremonies, actress Priyanka Chopra, Tendulkar — flanked by Mukesh and Nita Ambani — mostly sat laughing as witty tributes came his way from top Bollywood stars. The master blaster was showered with praise by the who’s who of the Indian film industry, former and current cricketers besides politicians.

“I couldn’t help but observe that the bowlers who were bowling to him. He was really middling the ball and really stroking it well. While I was talking to the stalwarts, I couldn’t help but ask them that kid was? Then I was told he was Sachin and he might be in the Indian team,” Aamir Khan said.

Abhishek Bachchan, who was there with his actress wife Aishwarya, meanwhile, had a unique take on Tendulkar’s 100 centuries.

Salman closed the issue on who would accomplish Tendulkar’s feat with a twinkle in his eye and cheeky grin, “You are lucky that I spent my time at studios, otherwise, I would have been the one sitting at your place, making this speech and scoring those hundreds also.”

Later when Tendulkar was called to the stage for accepting mementos from guests like Maharashtra Chief Minister Prithviraj Chavan, the batsman took a dig at Priyanka Chopra for addressing him as ‘sir’.

“I don’t know what to say when you call me Sachin sir. I just changed my hairstyle thinking that I would look young but it doesn’t work,” he said, leaving the actress in splits.

For the umpteenth time, Tendulkar spoke of the one-year wait he endured for going from 99th to 100th ton.

“From 99th to 100th hundred was a mega journey for me and for all of you, sorry about that, it wasn’t in my control,” he said.

Legendary singer Lata Mangeshkar also attended the function and paid her tribute by performing a rendition of one of her all-time hits — the title track of classic ‘Mera Saaya’ which happens to be Tendulkar’s favourite song.

During the function, another top actor Aamir Khan spoke warmly of the master batsman, calling him a “wonderul human being.”

“I was shooting for a film at CCI and in the evening, the Indian team had come for the nets. I was talking to the seniors and at the nets there was a little 14-year-old boy playing and I was thinking ye baccha kahan se ghus gaya Indian team ke nets mein (what is this kid doing in Indian net session?),” he recalled. (PTI)