Anil Kumble was recently appointed the head coach of the Indian team.

India coach and former skipper Anil Kumble turns 46 on Monday. Kumble was born on October 17, 1970 in Bangalore. Many took to Twitter to wish the champion cricketer on this occasion. He went on to become one of India s best match-winners during his 18-year career. He is India s highest wicket-taker in Tests with 619 scalps in 132 matches. With 337 One-Day International wickets in 271 games, he is the nation s highest wicket-taker in the shorter format as well. He was recently appointed the head coach of the Indian team. On his first assignment, India won the four-match series against West Indies 2-0 at the Caribbean. That series was followed by a comprehensive 3-0 series whitewash at home against New Zealand.

India as a result are ranked No. 1 in Tests, surpassing Pakistan. Kumble made his international debut way back in 1990 in an ODI against Sri Lanka. A Test debut followed couple of months later against England at Old Trafford. Kumble is the only India bowler and only the second in the world after Jim Laker to pick up 10 wickets in an innings. He finished with 10 for 74 against Pakistan in Delhi in 1999 and also finished with 14 wickets to his name in that match. Kumble also led India in 12 Tests between 2007-2008, including the infamous tour of Australia. His best ODI figures were 6 for 12, which he picked up against West Indies in 1996. Those were the best figures in ODIs by an Indian bowler, until Stuart Binny s 6 for 4 against Bangladesh in 2014 beat his former state teammate Kumble s record.

Happy Birthday to an India legend, the 3rd highest Test wicket taker of all time with 619, the one and only @anilkumble1074! pic.twitter.com/WZG2wtSuRh

@anilkumble1074 Happy birthday Anil. Have a great one

Many more happy returns of the day @anilkumble1074 .Hope to see a picture of you with cake spread all over. @imVkohli @coach_rsridhar

One of d most likeable&humble man 1can ever meet,

In life don’t be a Dumbo,

Kumble doesn’t do any Jumle.

A champion in every sense of the word, happy birthday to @anilkumble1074! May you lead our country to jumbo victories always!

Kumble was also a gritty batsman. He has five fifties and a century in Tests. He was often used as a nightwatchman and more often than not, did what was required off him. 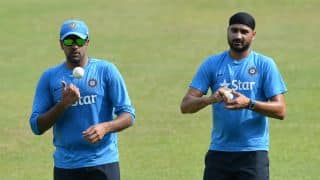