Sachin Tendulkar and his family are on holiday -- visiting a wildlife sanctuary in eastern Maharashtra's Vidarbha region.

Nagpur: Sachin Tendulkar and his family are on holiday — visiting a wildlife sanctuary in eastern Maharashtra’s Vidarbha region. Accompanied by his wife Anjali and son Arjun, the cricket legend landed at the Nagpur airport on Friday night for the weekend vacation. Excited about his trip, Tendulkar on Saturday morning posted a photo of his striped T-shirt, jeans and a hat on his Twitter account and was immediately flooded with thumbs-ups from his fans across the globe. “Soaking in the pleasure of Mother Nature! Spot me in the wilderness & guess where I am. Clue: Very much in Maharashtra,” he challenged his fans.

Though the guesses ranged from the obvious to the absurd, local officials said he had gone into the Umred-Karhandla wildlife sanctuary near Nagpur and even posed with forest department staffers for a photo. Though Umred-Karhandla is not an officially designated tiger reserve, the big striped cat is known to inhabit the area which has other major tiger sanctuaries. Maharashtra has six tiger sanctuaries of which five are in Vidarbha and one in western Maharashtra’s Sahyadri mountain ranges.

Last August, Tendulkar was invited to become Maharashtra’s Tiger Ambassador and he accepted the proposal by Forests Minister Sudhir Mungantiwar. According to official figures cited by Mungantiwar, Vidarbha has the potential to become the ‘Tiger Capital’ of India with its tiger population increasing from 169 in 2006 to 190 in 2014. 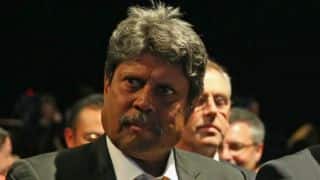