The recently knighted West Indian legend, Curtly Ambrose’s childhood was filled with playing football and basketball. Cricket definitely wasn’t his first love. It was only his mother’s love for cricket (Hillie Ambrose) that made him take up the game. He then went onto take more than 400 wickets in Tests for the West Indies and became a legend of the game. The great fast bowler, Ambrose who tormented many batsmen during his career talked about various subjects related to cricket and him being knighted.

Ambrose on the honour of being knighted, “It is a huge honour. I feel very privileged to have been honoured by my country Antigua and Barbuda. I am really humbled. I never expected it; I wasn’t looking for it. My hard-work, my great work through many years has not gone unnoticed.” Quoted as saying in an interview with Mid-day’s Clayton Murzello.

Ambrose on fans calling him with the prefix of Sir Curtly Ambrose, “Being Sir doesn’t change who I am. Of course, it is a huge honour but I guess I have got to get used to people calling me Sir. You could call me Ambrose or Amby… it doesn’t make a difference to me.”

Curiously, Ambrose wasn’t inspired by a quick bowler from the great generation of West Indian pacers in the 1970s and 80s. He said, “I did not have any early inspirations because cricket was not my first love. It was basketball and football so I never had any cricketing inspiration. I was self-taught.”

Ambrose on his sensational spell of seven for one against Australia at Western Australian Cricket Association (WACA) ground in 1992-93, “That was a day when I could do no wrong. I was in the zone and basically unstoppable and these things don’t happen very often in a lifetime. I enjoyed the moment… enjoyed it thoroughly and more importantly, we won the game and series.”

On learning the tricks of the trade of fast bowling from the great Malcolm Marshall, “We all know how great Marshall was — probably the greatest bowler West Indies produced. Being alongside Marshall and Courtney Walsh, I was always going to learn. These guys were great bowlers.”

He continued, “Apart from his cricketing skills, he had a wonderful cricket brain and this complimented his skill. In my opinion he was the best we produced.”

Ambrose didn’t play a single Test in India and missed the tour of West Indies to India in 1994 due too injury. He said, “I was injured [for the 1994 tour]. I will not use the word ‘regret’ because when you are competing in sport, injuries can happen. I had not played a Test series in India and I was looking forward to the experience. Unfortunately, I was injured [rotator cuff injury on his shoulder] and I was a bit disappointed at missing out.”

Ambrose’s opinion regarding who was the best batsman he bowled to, “I have been asked this question many times and it’s a difficult one to answer. I was fortunate and privileged to play against a lot of great players and I’d prefer not to name one. It’s very difficult to pick.”

Ambrose also said a few words on India’s batting maestro, Sachin Tendulkar, “He has to be one of the greatest batsmen ever to play this game — no two ways about it. He would be in my top five batsmen of all time.”

During his time, Ambrose had some intriguing battles with Tendulkar, especially when India toured West Indies in 1997. He said, “It was always a big challenge. I relished the challenge of bowling to a great player. If you got him out cheaply, you’d have done a wonderful job and if he scored a hundred, you could say he played extremely well. It was always a good contest between us.”

Ambrose though, never got Tendulkar’s wicket in his career. He gave his opinion on it by saying, “No, I didn’t know that. He was one of the toughest batsmen I bowled to. I have got a lot of respect for him and everything he achieved, he worked very hard for. He achieved so much, yet he is so humble and that to me, is a great quality.”

Ambrose on the infamous incident that took place on the second day at Port of Spain, Trinidad in 1995 with Australian batsman, Steve Waugh, “That happened in the heat of the moment. He and I exchanged a few words. It started on the pitch and ended right there. We never lost respect for each other. I never went on about it. Sledging was not part of my game. I didn’t play my cricket like that.”

Ambrose on his passion for music, “We [the band] play three to four times a week. I enjoy watching bass players too. Any band I got to watch, I always focus on the bass player and see what I can pick up from him.”

Ambrose about West Indies’ current setup, “I still maintain that. With all the cricketers I see now, they are not so talented, not as great as the players before them. I don’t see us getting back to those glory days. I am not saying we will not be number one again, but we will not see the kind of players we had before.”

He continued, “I wish to see West Indies cricket get better. I believe that when West Indies cricket is strong, it is good for world cricket. I just hope and pray that we get the right nucleus of players to take our cricket back to the top. It requires hardwork. We will have to make some changes to this team and start to blood some younger players so that in a few years’ time we are able to compete with the best teams.”

Ambrose went back in time to talk about the 1996 World Cup held in the subcontinent; “I remember we lost to India [in Gwalior]. We had India on the ropes with some early wickets, but Sachin Tendulkar was dropped by the wicketkeeper Courtney Brown [when he was on 22] and he went on to get 70 to win the game for India. We were defending a small total [173]. Had we got Tendulkar, we would have won the game. He played a wonderful innings.”

West Indies had the ignominy of losing to Kenya in 1996 Wold Cup. Ambrose talked about the disappointing loss, “It was heart-breaking. No one expected Kenya to beat us but that’s part of cricket. We played badly and we lost.” 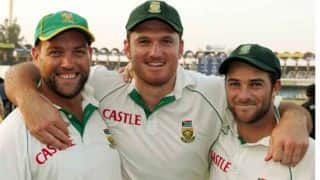