He may be on the cusp of his 40th birthday but Sachin Tendulkar is still very much "needed" by Indian cricket, according to BCCI president N Srinivasan, who firmly believes the senior batsman will time his exit from Test cricket to perfection. 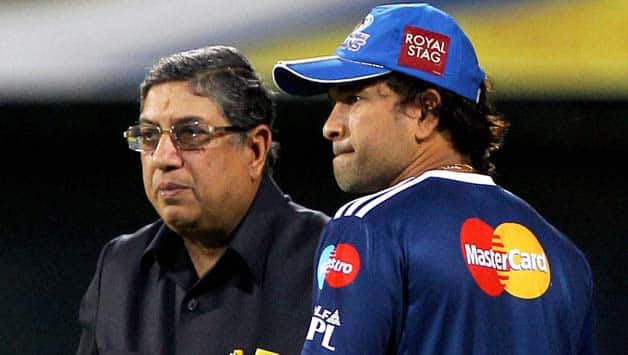 He may be on the cusp of his 40th birthday but Sachin Tendulkar is still very much “needed” by Indian cricket, according to BCCI president N Srinivasan, who firmly believes the senior batsman will time his exit from Test cricket to perfection.

“He is one who will not hold on to his place if he believes that he doesn’t have much to offer to the country,” Srinivasan said.

“I have absolutely no doubt that Indian cricket needs him — and will leave the final call (on when he should quit) to him,” the Cricket Board chief was quoted as saying by Outlook magazine that has brought out a special edition to commemorate Tendulkar’s 40th birthday.

The batsman, who has not been in the best of form for a while now, turns 40 on April 24.

“If he feels he has cricket left in him, we should respect that and leave him alone. There is no doubt he is trying his level best,” Srinivasan said.

As far as the perfect role model in Indian cricket is concerned, like many others, Tendulkar is the man for Srinivasan.

“As a role model and an Indian cricketing icon, Tendulkar has no parallel. He gets the same standing ovation in every cricket-playing country and is one player who the crowds love to watch. I am actually glad that Sachin plays for India.”

India captain Mahendra Singh Dhoni might have been the ad world’s favourite boy for the last few years, but Srinivasan has no doubt Tendulkar remains Indian cricket’s biggest brand.

“Without question, he is Indian cricket’s biggest brand. He has been around for 24 years and has been consistent right through.

“Consistency, I’d say, is the hallmark of the Sachin brand. He is a very modest individual who has achieved the most impossible of feats.”

Srinivasan said passion will be the “real” legacy Tendulkar will be leaving behind once he call it quits.

“His real legacy will be the passion he brought to the game.”

The BCCI chief demonstrated his point with an example.

“I remember this incident from a couple of years earlier when we were playing in Sri Lanka, I think. It was a close match and Sachin was flinging himself to save a boundary. If he can do that at 38 years of age, it is a lesson for every aspiring cricketer the world over.

“I will forever remember him for the passion he brought to the game.”

The mere thought of Tendulkar’s retirement leaving behind a void is worrying for Srinivasan.

“Once he goes, there will be a huge void, which we can’t even come to terms with at this point. It is a habit to see Sachin walk out at number four for India and it gives us all a sense of comfort.

“His presence in the dressing room, the way he inspires youngsters — these are aspects that we must take into consideration.”

Srinivasan recalled the time Tendulkar started opening the innings for India’s one-day side back in the mid 90s.

“I know he will not be around for too long. Yes, I can watch recordings, but the sight of Sachin walking out gives us all a high. He revolutionised one-day cricket when he started to open the batting for India.”

“When he retired from ODI cricket, he called me and said he did not feel he could play the 2015 World Cup and it was time to move on.”