Veteran Sachin Tendulkar dropped out of the batting top-10 to be 13th, while pace spearhead Zaheer Khan slipped a spot to 10th in the bowling chart as India's misery in the Test series against Australia reflected in the latest ICC rankings issued on Sunday. 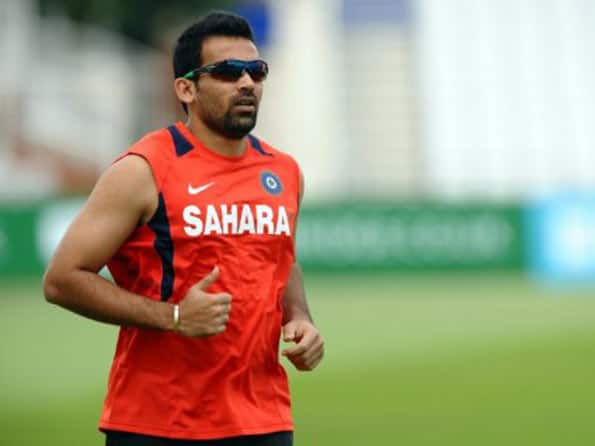 Veteran Sachin Tendulkar dropped out of the batting top-10 to be 13th, while pace spearhead Zaheer Khan slipped a spot to 10th in the bowling chart as India’s misery in the Test series against Australia reflected in the latest ICC rankings issued on Sunday.

Outplayed 0-4 in the series that concluded on Saturday, Indian players saw their individual standing take a beating in the ICC charts.

While Tendulkar slipped to 13th, another senior batsman Rahul Dravid went down three spots to 18th. VVS Laxman was down a couple of positions at 23rd while Virender Sehwag was spot behind him after losing a rung.

Sehwag’s opening partner Gautam Gambhir also dropped two places to 34th. However, Virat Kohli, the only Indian to score a hundred in the series, gained 17 places to be 50th in the latest list.

Among the bowlers, Zaheer was the only Indian in not just top-10 but also the top-20.

On the other hand, there was good news for Australian players, who made upward movements.

Pacers Peter Siddle, Ryan Harris and off-spinner Nathan Lyon moved up the charts. Siddle, who won the man of the match award for his six for 96 in the Adelaide Test, gained two places and is now in fourth position with a career-best rating.

Harris’s match figures of four for 112 lifted him four places to 22nd spot, while Lyon’s five for 111 earned him nine places, putting him in 43rd position.

Mainstays of their sides’ batting orders — Michael Clarke and Ricky Ponting — have made big strides in the Rankings for Test batsmen.

Clarke, who ended up as the player of the series against India, has moved up seven places and now occupies third position. Ponting is the next highest-ranked Australia batsman in 14th position after he climbed eight places following his scores of 221 and 60 not out in Adelaide.

Meanwhile, England must win the Dubai Test to be guaranteed number-one spot at the April 1 cut-off date while Pakistan’s 3-0 series win will bring it three points closer to India and Australia.

Crafty off-spinner Saeed Ajmal has risen one more place and his spin partner Abdur Rehman has broken into the top 10 for the first time in his career in the rankings for bowlers.

Saeed followed up his 10-97 in the Dubai Test with seven for 130 in the Abu Dhabi Test which was enough to put him ahead of England’s fast bowler James Anderson in second position.

The 34-year-old has earned 50 ratings points for this achievement giving him a career-best rating, and he now leads Anderson by 25 ratings points but still trails number-one ranked Dale Steyn of South Africa by 84 ratings points.

Rehman, who had figures of two for 67 and six for 25 to win the man of the match award, has jumped five places to ninth spot. This is after 23 years year that two Pakistan spinners figure inside the top 10 of the Test player rankings.

Pakistan skipper Misbah-ul-Haq has broken into the top 10 for the first time in his career in eighth position by rising six places following his contributions of 84 and 12.(PTI)