Tendulkar, recipient of India s highest civilian honour, the Bharat Ratna, is the only cricketer to have scored 100 international centuries.

Mumbai: “Sachin: A Billion Dreams“, a biopic on cricket icon Sachin Tendulkar has won two awards at the recently concluded 11th Tehran International FICTS Festival 2018. Helmer James Erskine won the trophy for the Best Director of a Long Documentary and an honorary diploma. Producer Ravi Bhagchandka received the Special Award for the Best Film in the Long Documentary section.

“It is a great honour that my work on telling the story of India’s greatest cricketing legend has been appreciated on a global stage. “Scripting his journey for the big screen involved interacting with Sachin, his family, his teammates as well as players from rival teams and others and I am happy that the emotions are reaching out to a global audience,” Erskine said in a statement.

The 11th Tehran International FICTS Festival was held from January 16 to 18 under the supervision of FICTS in collaboration with the Olympic and Paralympic Committees, the Ministry of Culture, Sports and Youth, the Ministry of Labour and Social Affairs of the Islamic Republic of Iran. 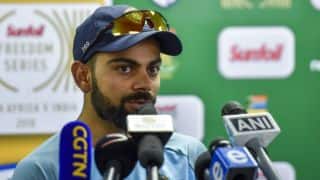 India vs South Africa, 3rd: Virat Kohli urges team members to rectify past mistakes and step up at Wanderers