Sachin Tendulkar is is celebrating his birthday with family and friends in Mumbai.

Indian cricket legend Sachin Tendulkar is celebrating his 41st birthday on Thursday. On the occassion, the cricket fraternity came together to wish the batting maestro, who retired from international cricket last year, in 2013. Tendulkar was presently involved with the Indian Premier League (IPL) side Mumbai Indians (MI), and returned to India only on Thursday.

Tendulkar had returned from the UAE, where IPL-7 is going on, according to sources close to him, and is celebrating his birthday with family and friends in the city.

This is the first birthday for the cricket great after he quit all forms of cricket in November 2013 after playing his 200th and final Test at his home ground, Wankhede Stadium, against the West Indies. The Board of Control for Cricket in India (BCCI) had cobbled together the hastily arranged two-game series against the Caribbean islanders to give a befitting send-off to the legend.

Sachin Tendulkar turns 41 today… Happy Birthday… !!!! Have a good one and many more!!!

Happy birthday @sachin_rt wish you all the happiness. Really happy to still share the dressing room with you. — Rohit Sharma (@ImRo45) April 24, 2014

Happy birth day to @sachin_rt sir. Your presence is enough for youngsters to learn n dream high. You will always remain our idol.

Catch all the special features on Sachin Tendulkar here 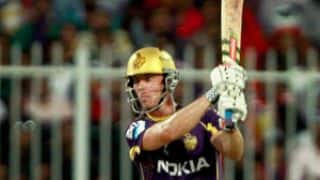