Tendulkar's fascination for speed has made him actively involved in this virtual gaming project.

New Delhi: Sachin Tendulkar‘s love for mean machines is a well known fact but there was one such instance when his passion for speed ended up giving him and his wife Anjali “a headache” that lasted one whole day.

“It was some years back in England. The BMW guys gave me one of their limited edition cars to check out. They told me to give them a feedback and said ‘Check out the brakes’. Sachin Tendulkar feels batsmen today must work harder to counter quality bowling

“So I convinced Anjali to come with me for a drive and I really pressed it hard. I won’t tell you what speed I was driving. Since they told me to check the brakes, I applied it and it came to halt. Such was the G-force, me and Anjali both felt it and we both had a headache for the entire day. It was an experience I remember,” Tendulkar narrated the incident today at the inauguration of the Gurgaon centre of ‘Smaaash’ at premium urban gaming centre. Sachin Tendulkar praises Rohit Sharma for improved leadership skills

In fact such is his love for speed, that he along with some of his friends have redesigned a go-karting track in Mumbai, which according to him “gives a chance to overtake each other”. Sachin Tendulkar: It was about key players getting the momentum

Tendulkar’s fascination for speed has made him actively involved in this virtual gaming project, where one can drive a F1 car, stop a penalty kick by Cristiano Ronaldo or face inswing yorkers from Brett Lee or Muttiah Muralitharan‘s doosra. Sachin Tendulkar, Rahul Dravid, Sourav Ganguly set to hold advisory roles with Team India

One of Tendulkar’s favourite games at the sports hub is walking on a virtual plan from one High-Rise building to another. Archana Vijaya: Sachin Tendulkar is my all-time favourite cricketer

“Once you wear those specially designed glasses and try out the game, you will feel that same level of excitement. Walking on a mere plank between two high-rise buildings. I tried a leap of about six or seven feet and nearly tumbled. Once I played the game, I felt the same kind of headache. So those who want thrill should try this game out,” insisted Tendulkar. MS Dhoni, Sachin Tendulkar, Virat Kohli: Films that could be based on cricketers’ lives 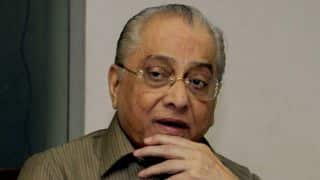