The Indian's women team will tour South Africa for a three-match ODI series, which starts at Kimberly on February 5.

Mumbai: Cricket icon Sachin Tendulkar gave a pep talk to members of the Indian women’s team and skipper Mithali Raj said today that interaction with him would benefit all the players. “Talking about the interaction with Sachin (Tendulkar), it was very important for the team as well as the players individually because we got to learn from his vast experience,” Mithali told reporters here at the pre-departure press conference.

The Indian’s women team will tour South Africa for a three-match ODI series, which starts at Kimberly on February 5, followed by a five-match T20 series, which begins on February 13 at Potchefstroom. The team will fly to the African nation tomorrow. “He (Tendulkar) told us how he handled pressure, failure and things like that. It will benefit all the players to handle different situations in their career,” the skipper noted.

It was understood the legendary batsman told the players to go with a positive frame of mind and advised them not to worry about the conditions there. Meanwhile, Mithali said the T20 games in South Africa would help them prepare for the Women’s T20 World Cup to be played in West Indies later this year. “We were preparing for the World Cup, a one day format. Once you have a goal and you want to achieve something, your focus is on one format.

“So now it is a start (of) preparation for the T20 World Cup as we are playing five T20 games. Now, we are preparing for T20 World Cup, but it is an ICC Championship as well, so the ODIs are equally important,” she said when quizzed that they last played a T20 in December 2016.

“Yes it’s been a while playing T20 format. As an Indian team we are looking forward to T20s and need to work hard in this format,” she added.

Meanwhile, Mithali also said that she would stick to the batting order and won’t try too many new things.

The skipper also praised young Mumbai girl Jemimah Rodrigues saying she has scored a lot of runs at the Under-19 level.

“Jemimah is a young, talented girl. She scored a lot of runs at the U-19 level as well as the Challengers. She is very promising and as a captain my only wish is that she performs whenever she gets her opportunity for the country and herself. Also, she is a very good fielder. In fact she is amongst the best fielders in the team,” Mithali said. 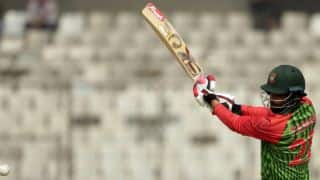