The Pakistan Cricket Board (PCB) decided to crackdown on bowlers with suspect actions.

After the ban on ace off-spinner Saeed Ajmal, Pakistan are on ‘mission cleanup’ with an astonishing 28 cases of suspect bowlers being reported in the ongoing national T20 championship at the national stadium.

In all the instances, the match officials have reported or even stopped the bowlers from bowling. The list includes six bowlers, who are repeat offenders. “I don’t want to go into names of these bowlers but I can confirm they are around 17 bowlers who bowl off-spin,” Intikhab Alam who is head of domestic cricket in Pakistan said.

In the last match today, off spinner Usman Malik of the Lahore team was stopped from bowling after sending down three overs by the on-field umpires. “The figures are high but it is high time something was done about these bowlers. They include some bowlers who have only minor issues with their action that can be corrected under proper supervision,” he said.

The Pakistan Cricket Board (PCB) decided to crackdown on bowlers with suspect or illegal bowling actions in domestic cricket after Ajmal was reported post the first Test against Sri Lanka in Galle last month. Earlier this month the International Cricket Council (ICC) suspended him from bowling in international cricket after he failed a biomechanics test in Brisbane. Ajmal is presently working on his bowling action under the supervision of Pakistan’s former spin great Saqlain Mushtaq at the national cricket academy.

Alam, who is also a member of the PCB’s illegal bowling action committee, said that the board had told match officials to keep a vigilant eye not only in the ongoing national T20 event but also overall in domestic cricket including the inter-district and under-19 championships. “It is a difficult situation but we have to handle it now,” he added.

Saqlain himself a former off-spinner, who is credited with pioneering the “Doosra” delivery, has said that he is confident that Ajmal can play in the 2015 World Cup. “Saeed is really working hard on his action and in the first phase we are just focusing on him mastering the traditional off-break with a slightly remodelled action after which he will be allowed to try out the “Doosra” and other deliveries,” Saqlain said from Lahore.

The PCB has said it will spare no expenses to try and help Ajmal get clearance from the ICC to bowl again in international cricket before the World Cup. But privately, even the selectors and team management feel that this might not be possible. 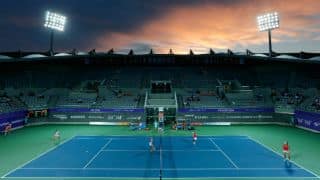