Saeed Ajmal has been recalled to the national side and believes it to be his rebirth in international cricket.

Karachi: Pakistan ace spinner Saeed Ajmal, who has been recalled to the national side and believes it to be his rebirth in international cricket, has expressed that he would leave no stone unturned in becoming the ‘best bowler’ again for his team in the forthcoming tour against Bangladesh with his remodeled action. Pakistan players miffed with Waqar Younis’s attitude: Reports

Ajmal, who missed the recently concluded ICC Cricket World Cup 2015 due to an illegal bowling action, was cleared by the International Cricket Council (ICC) on February 7, after tests cleared his re-modelled bowling action. Terming his comeback as ‘rebirth’ in international cricket, Ajmal said that he was very excited to play for Pakistan again and wants to be the best bowler in all formats against Bangladesh as he has never settled for less, The Express Tribune reported.  Shakib Al Hasan confident of doing well against Pakistan; will play only two games in IPL 2015

The Doosra specialist insisted that it was a tough phase in his career but admitted that not even for a second he thought he wouldn’t be able to make it back. Ajmal further said that he kept on believing in himself and bowled thousands of balls with his remodelled action. Admitting that he felt ‘sad’ on missing the World Cup, Ajmal said that his target now is to help Pakistan win a major ICC tournament (the World Twenty20 or the Champions Trophy) before he retires. Saeed Ajmal returns to Pakistan squad for Bangladesh tour 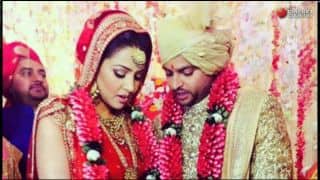 Kaka to play for Sourav Ganguly’s Atlético de Kolkata in this year’s ISL?