Ajmal had set himself a target of returning in time for Pakistan tour of Bangladesh.

Karachi: Cleared to resume international cricket after his bowling action was found to be legal, star Pakistan off-spinner Saeed Ajmal on Saturday expressed contentment and said he intended to play for another 3-4 years.

“I am really happy today that finally my action is clear and all the hard work has paid dividends. I have no intention to retire and I want to play for three to four years more for Pakistan,” Ajmal told reporters in Lahore.

Ajmal, 37, said he had set himself a target of returning in April-May when the national team tours Bangladesh.

“But if an emergency arises and I am required then I am ready to also go to the World Cup but my preference is to ready myself for a comeback against Bangladesh,” he said.

To a query, he said, “It is most disappointing I went through this crisis before the World Cup. I am just happy to be cleared. I have to still do more work on my modified action and new deliveries. I have set myself a target of trying to return to international cricket in Bangladesh.”

Ajmal admitted he went through a tough time after being suspended from bowling in international cricket last September by the International Cricket Council (ICC) because of an illegal bowling action.

“It was really hard but I never gave up and even with my modified action I was confident I can play again,” he said.

The bowler said those questioning whether he would be as effective as before with his new bowling action, would soon get their answer.

“I can understand their concern but I have worked hard on improvising my deliveries and I have developed a strong carrom ball and some other deliveries. I have started playing outdoors and it is good to see I still retain the same bounce, pace and zip in my bowling,” he explained.

The experienced off-spinner, who has 178 Test, 183 One-Day International (ODI) and 85 Twenty20 International (T20I) wickets to his credit despite a late start in international cricket, said he would like to see the Pakistan Cricket Board (PCB) complete its own bio-mechanic lab in Lahore’s National Cricket Academy (NCA) soon.

“They are saying it will be completed by June. It is much required as it will allow our bowlers to deal with bowling action issues in advance and be confident. The ICC’s new rules on actions is now very stringent,” he said.

Asked which team would be the favorite in the India-Pakistan clash in the World Cup on February 15, Ajmal said both sides had hard time in New Zealand and Australia.

“They have both lost their recent matches but I know when they play against each other it will be on a different level and since both are balanced teams, I will go with Pakistan,” he said, adding, “It appears Pakistan have best chance of beating India in a World Cup match this time.” 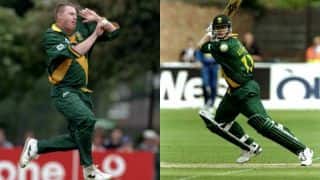