jmal on Monday also reiterated his confidence that his corrected bowling action would be cleared in the tests.

Ajmal on Monday also reiterated his confidence that his corrected bowling action would be cleared in the tests as he was now straightening his arm within the 15 degrees allowed by the ICC. “I have worked very hard on removing chinks in my action and once this stage is cleared I am sure I will resume playing international cricket again soon,” he said.

But the national selection committee headed by Moin Khan apparently is not so confident as while sending a provisional list to the Pakistan Cricket Board (PCB) for submission to the ICC, it has included Ajmal’s name subject to his clearing the informal test. “If he doesn’t clear the test then he will not be part of the provisional squad,” one PCB official told PTI.

Ajmal?s bowling action was initially reported by the match officials during the first Test against Sri Lanka at Galle in August. Later he failed a biomechanics test ordered by the ICC and was suspended from international cricket.

For the last two months he has been working on correcting his bowling action the help of Saqlain and other experts. A reliable source said the selectors had however included the names of discarded senior players Shoaib Malik and Kamran Akmal in the provisional squad without any pre-conditions.

Not surprisingly the selectors have also included senior batsman, Younis Khan in the provisional squad which has to be sent to the ICC by December 7. “Younis is back in the one-day squad although Pakistan’s next One-Day International (ODI) now is not before November 8 when they play New Zealand in the UAE,” the source said.

The selectors had dropped Younis for the one-day series against Australia leading to a lot of hue and cry and the senior batsman has played just a single ODI since March, 2013. But in the ongoing series against Australia and New Zealand, Younis has broken records with four centuries in three Tests. The source said that the selectors had also asked the board to hold a fitness test for seasoned pacer, Umar Gul before the December 7 deadline.

Special Christmas for Warner this year 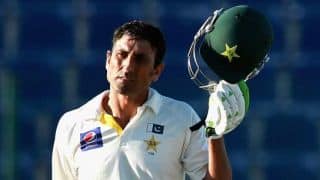