The 38-year-old Ajmal was suspended from bowling last year in August.

The bowling actions of Pakistan‘s ace spinner Saeed Ajmal and Sohag Gazi of Bangladesh have been deemed legal, the International Cricket Council (ICC) said on Saturday.

Both off-spinners were reported for suspected illegal actions in August and both failed the initial tests.But the ICC said following remedial work and re-tests, the two could resume bowling in international cricket.

“At the re-tests, it was revealed that the amount of elbow extensions in both the off-spinners’ bowling actions for all their deliveries was within the 15-degree level of tolerance permitted under the ICC regulations,” it said in a statement.

Under the ICC rules, bowlers are permitted to straighten their bowling arm by no more than 15 degrees during delivery.Umpires can still report the two bowlers if they believe they are displaying a suspect action, the council said.

“To assist the umpires they have been provided with images and video footage of the two bowlers’ significantly remodeled legal bowling actions,” it added.The re-tests were undertaken at the Sri Ramachandra University in Chennai on 24 January.

The ICC decision comes just days ahead of the start of the World Cup being played in Australia and New Zealand.  Ajmal was withdrawn from Pakistan’s World Cup squad because of his suspension over the illegal bowling action. Gazi was also not named in Bangladesh’s side for the tournament. 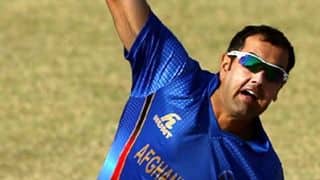