Ajmal has been working on his bowling action with Pakistan's former spinner Saqlain Mushtaq.

With Mohammad Hafeez also being suspended from bowling in international cricket, the Pakistan Cricket Board will decide on December 8 when to send Saeed Ajmal for the official ICC biomechanics test.

Ajmal made a quiet return to Pakistan yesterday from London where he has been working on his bowling action with Pakistan’s former spinner Saqlain Mushtaq.

“He was supposed to play for ZTBL in a Quaid-e-Azam trophy match which started from Saturday in Karachi but he reached Lahore and went straight to his hometown, Faisalabad,” a board official told PTI.

“He will now appear before the PCB bowling action review committee on Monday which will decide his future course of action. In all probability Saeed will be asked to first play a first class match from next week before the committee decides to advise the PCB to send him for the ICC biomechanics test,” the official said.

The good news for the board is that in his second unofficial test carried out before he returned to Pakistan, Ajmal apparently bowled all his deliveries within the ICC limit of 15 degrees allowed to bowlers to extend their elbows.

But it is not clear whether these deliveries include his main wicket-taking delivery, the doosra.

“He has to play at least one match and bowl long spells in match conditions with four cameras monitoring his every delivery only then will it be clear when he can appear for the ICC test,” the official said.

The PCB selectors have included the names of Hafeez and Ajmal in the preliminary list of 30 players for the World Cup but they have to finalise the final 15 squad by January 7.

But the official said that even if it took some time for situation to clear about Ajmal, the PCB can ask for a special extension to the ICC to name their 15 under a special law allowed to teams. 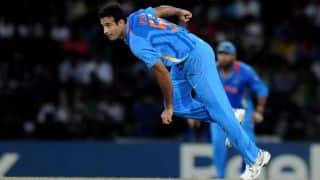