According to Shoaib Akhtar, Indian cricket needs Sachin Tendulkar even after the latter’s retirement. The former Pakistan fast bowler was speaking about the Little Master in India Today's 'Salaam Sachin' conclave in Mumbai on November 12, 2013. 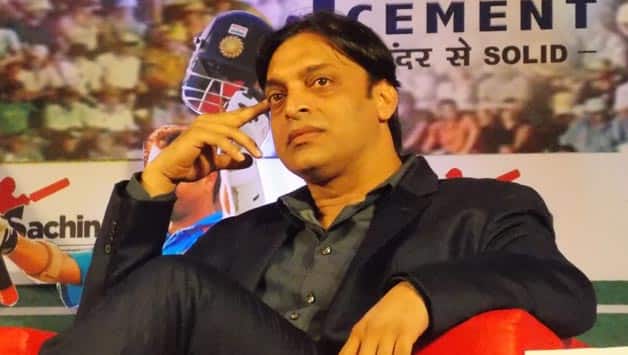 Shoaib Akhtar (above) said it is because of humility that Sachin Tendulkar has reached the heights in life and in cricket. Photo courtesy: Sudatta Mukherjee

According to Shoaib Akhtar, Indian cricket needs Sachin Tendulkar even after the latter’s retirement. The former Pakistan fast bowler was speaking about the Little Master in India Today’s ‘Salaam Sachin’ conclave in Mumbai on November 12, 2013.

Akhtar said in India Today’s Conclave, “Indian cricket needs Sachin after retirement. Don’t let go of him. He can mentor the youngsters. India will never let him forget his past. He will have to get out of it, so that he can move on with the future,”

“When a cricketer leaves the sport, he doesn’t know where he stands. He stands in wilderness, not knowing what to do. You don’t have any pressure or you don’t have to go for training. I am sure he will come out of this and will move on. There are big avenues open for him. Cricket should utilise him.”

The world’s fastest bowler joked about the similarities he had with Tendulkar in regards to batting. “There was one thing common between me and Sachin. We had the same bat weight and stance. I would tell him the only difference was 13,000 runs. His class is right up there, he is simply the best.”

He also went onto talk about his favourite Tendulkar innings. “I pick his 119 not out against England at Manchester as my favourite. He took control of the game and I remember that he wasn’t wearing the visor in his helmet.”

Akhtar’s former Pakistan teammate and captain Waqar Younis also had words of praise for Tendulkar. He said as captain they would discuss about the opposition players and Tendulkar was always the hot topic.

“It is unfair to rank players. Of course as captain you may pick Sachin. With him it is that once he gets going, he would score big,” said Waqar.

Waqar and Tendulkar made their debuts in the same match back in 1989 and the former pacer said, “We started together, but it is 10 years since I retired. Now, it is time for me to retire from commentary, but Tendulkar is still playing.”

Akhtar then said, “Allah has not only blessed him as a cricketer. But, he is also a good human being. Allah has given him so much money, wish he gave me half.

“In 2007, I spent some time with him. He liked Pakistani food. After a party at Lucknow, we were walking back with a few players. I said, ‘Sachin. I’ll pick you.’ I lifted him and he fell. I said, ‘If anything happens to you, I will not leave this country alive’. He is so humble and that is why he is there.”

Pakistan's loss to South Africa in ODI series not a good sign ahead of 2015 ICC World Cup: Misbah-ul-Haq