Sam Robson has scored his first Test fifty and is batting alongside Ballance.

After their pace battery steamrolled over Sri Lanka to bowl them out for jut 257 in the first innings on Day One, England’s reply have been steady so far, as they stand at 106 for the loss of one wicket at the end of the first session on Day Two of the second Test.

Resuming their innings at the overnight score of 36 for no loss, Alastair Cook and Sam Robson started off well, rotating the strike and also hitting a couple of boundaries. But the partnership didn’t last long on Day Two morning as Cook went hard at a wide delivery outside off from Dhammika Prasad, got the edge which was safely pouched by Kumar Sangakkara at third slip.

Cook’s wicket brought centurion from last match, Gary Ballance to the centre. Both Ballance and Robson have now stitched a fifty-plus partnership, and have looked assured in the middle so far. Robson has been the more stroke-making of the two, and has also brought up his first fifty in Test cricket.

England would ideally want these two to carry on and take England past the 200-mark. Sri Lankan bowlers haven’t got the same purchase from the pitch as English bowlers did on Day One morning. Nuwan Pradeep’s second spell did produce a couple of close shaves, but nothing alarming from England’s point of view. 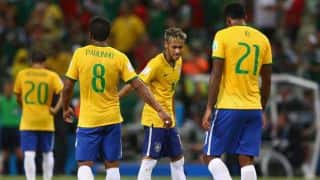 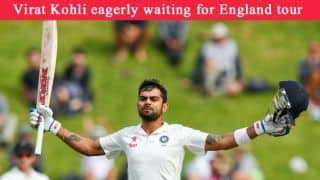