Sammy upbeat despite loss in one-off T20 against Bangladesh

Sammy upbeat despite loss in one-off T20 against Bangladesh

West Indies captain Darren Sammy has said he was not discouraged by his side's heart-breaking loss to Bangladesh in the one-off Twenty20 International. 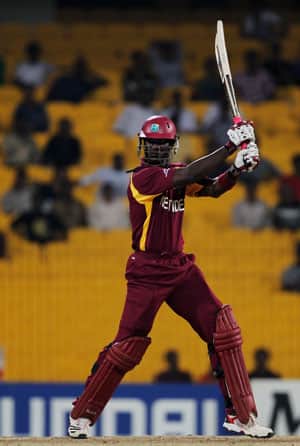 Darren Sammy said his side made many mistakes Getty Images

West Indies captain Darren Sammy has said he was not discouraged by his side’s heart-breaking loss to Bangladesh in the one-off Twenty20 International.

West Indies went down by three wickets with a ball to spare Tuesday, after appearing to be in control of the Bangladesh innings for most of the way at the Sher-e-Bangla Stadium.

“This is the start of the series so we will regroup and come back,” said an upbeat Sammy.

“We have the three One-Dayers and the two Test matches so there is a lot to play for. We will look at the areas where we went wrong today (Tuesday) and lift our game for the upcoming matches.”

West Indies face Bangladesh in the first ODI Thursday at the same venue. West Indies seemed poised to hold on for a tense win with Bangladesh needing five to win off the last three balls.

However, captain Mushfiqur Rahim, who carved out a superb, unbeaten 41, smashed the penultimate ball of the game for six, to snatch a dramatic win for his side.

“Hats off to Mushfiqur … he played well and took it from us. From the start we knew it was going to be an interesting series. We saw a very exciting match which went down to the wire,” Sammy said.

“We never took them for granted. We know Bangladesh are a good team. They held their nerves better than we did. We could have scored more runs, and we could have stopped more balls in the field. But in the end we made more mistakes than they did, that is why we lost.”

The West Indies scored a modest 132 for eight after being sent in, a total engineered largely by Marlon Samuels’s 58 from 42 balls.

Bangladesh lost key wickets along the way to slump to 93 for six in the 16th over before Mushfiqur and Nasir Hossain (18) posted a crucial 34 off 24 balls for the seventh wicket to revive the innings.

Nasir fell to pacer Ravi Rampaul off the third ball of the final over but Mushfiqur’s swat over mid-wicket broke the Windies hearts.

“I had the belief our bowlers could defend the score. We defended 113 against England at the Oval a few weeks ago but tonight it did not go our way,” said Sammy.

“Throughout the match it fluctuated … it went back and forth and things happened quickly. In the end Bangladesh got over the line.” (IANS)

Mazhar Majeed has put every player under suspicion: Paul Marsh

Vijay Merchant was a great philanthropist and a true Karmayogi