Samuel Badree believes it is his unwillingness to play for fame or personal accolades which has made him successful in the T20 format. One of the crucial member of West Indies‘ triumphant T20 World Cup 2016 campaign, ‘the street smart’ Badree took 9 wickets from 6 games at a mere economy rate of 5.39. While all the attention was diverted towards the likes of Chris Gayle, Andre Russell, Dwayne Bravo, Carlos Brathwaite, Badree went about his business without coming to much of a notice. His faster one’s coupled with wicket to wicket bowling has been the reason behind his success in the shortest format of the game. And West Indies have managed him to particular brilliance, with him opening the bowling attack in each of his 28 games. ALSO READ: World T20: Carlos Braithwaite in demand among Big Bash League clubs after West Indies’ successful campaign

The bowler himself though remains grounded despite so much success. “I think I get overlooked for the simple reason of law of recency. For the most part, I have finished my work inside the first half hour of the game. By the time the game has ended, many people forget what had happened in the beginning and the performances toward the end of the game are most remembered. It is what it is.”

“I have never played for recognition, accolades, fame or fortune but rather to be the best player I can be with my skill set. I love contributing to team success no matter who I play for and that brings me greater joy and satisfaction than any individual award. I started playing this game because it brought me great joy and will continue to play as long as I am still experiencing that joy.”

Despite being not a big turner of the ball, Badree has been hugely successful. Playing at a time when the likes of Imran Tahir, Adam Zampa, Ish Sodhi, Rashid Ali and other leg spinners coming into fore, Badree has stood out amongst the rest. And he believes the lack of turn works in his favor. “I reckon I have been effective because I am underrated and batsmen think they can easily score off me because of a lack of turn, because I bowl with the new ball and within the power play. I use accuracy, knowledge of batsmen I’m coming up against, conditions, a bit of variety and some common sense to out think batsmen. There is also a fair bit of luck involved, admittedly.”

He was supposed to be involved with Royal Challengers Bangalore in this season’s IPL, but an injury ruled him out of the tournament, giving Virat Kohli a huge headache. Badree’s intelligence of the game would have been hugely beneficial for RCB, who have shed way too many runs.

What happened when KL Rahul asked, "Baby, grab my bag" 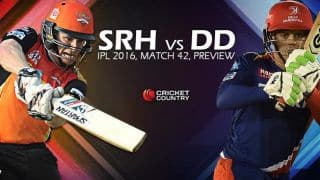