Marlon Samuels and Denesh Ramdin both scored fifties as West Indies reached 280 for eight against England at stumps on the third day of the third Test at Edgbaston on Saturday. 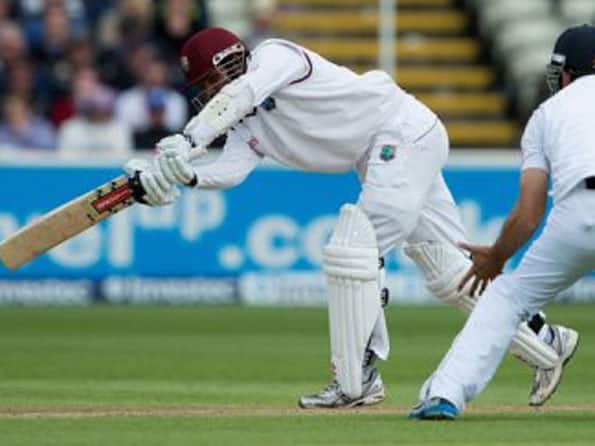 Marlon Samuels and Denesh Ramdin both scored fifties as West Indies reached 280 for eight against England at stumps on the third day of the third Test at Edgbaston on Saturday.

Samuels followed his hundred in England’s nine-wicket second Test win at Trent Bridge with a stylish 76 as this match finally got underway after the first two days had been washed out without a ball being bowled.

West Indies, who had been a solid 85 for one at lunch, slumped to 152 for five but rallied thanks to a sixth-wicket stand of 56 between Samuels and wicketkeeper Ramdin.

At the close, Ramdin was 60 not out after completing a 97-ball half-century with six fours. Ravi Rampaul was unbeaten on two.

Graham Onions marked his recall to Test duty in the absence of rested paceman James Anderson and Stuart Broad with three wickets for 56 runs in 24 overs while Tim Bresnan took three for 74 in 26.

Samuels, banned for two years for betting offences in 2008, was delighted by his latest innings.

“Right now, this is my time to enjoy myself, my time to shine,” he told reporters after stumps.”

But, as Anderson had done at Trent Bridge, Onions engaged Samuels in plenty of ‘banter’ in the middle.

“I guess Onions is not learning,” said Samuels. “It motivated me to stay out there. It was rude but fun.”

Onions himself was just delighted to be playing Test cricket again after suffering a career-threatening back injury.

“A couple of years ago I genuinely didn’t think I was going to play cricket again, which made today even more special,” said Onions, appearing in his ninth Test but first in more than two years.

“I was pretty nervous this morning but I really enjoyed it — it was like a second (England) debut,” added the 29-year-old Durham quick, who still has a five inch titanium screw in his back.

England’s position might have been stronger had they not dropped three slip catches.

History was against either side winning this match as only twice before, when England beat New Zealand at Leeds in 1958 and New Zealand defeated Bangladesh at Hamilton in 2001, had teams won a Test after the first two days had been washed out completely.

That England captain Andrew Strauss opted to field first after winning the toss against a West Indies side whose top-order collapses had helped the hosts into an unassailable 2-0 lead in this three-Test series was no surprise.

And Onions, nearly had an early wicket.

Adrian Barath had made four when he edged Onions only for Ian Bell, fielding in the third slip position often occupied by Anderson, to drop the straightforward chance.

Instead it was Bresnan who struck first when he had Kieran Powell caught by second slip Graeme Swann for 24 to leave the tourists 49 for one.

Barath was still on his lunch score of 40 not out when he was reprieved again by Bell, who dropped an easy chance off Finn.

Fortunately for England, it was not an expensive miss as Barath had added just one run when Onions had him lbw.

Test debutant Assad Fudadin, in for the dropped Kirk Edwards, saw his promising innings end on 28 when he gloved a well-directed Bresnan bouncer and Bell, to the delight of his Warwickshire home crowd, at last held a catch.

Samuels struck successive deliveries from off-spinner Swann for a six and a four to complete a 76-ball fifty.

But he was out when, shortly before the new ball, he fell lbw to Bresnan’s off-cutter.

The Jamaican reviewed New Zealand umpire Tony Hill’s decision but replays indicated the ball had just pitched in line and Samuels’s entertaining innings, featuring a six and 10 fours, was at an end.

But the all-rounder was still on 16 when he fell to the same combination.

And before stumps, the accurate Onions had Test debutant Sunil Narine playing on for 11. (AFP)

Rahul Sharma, Dinda pick early wickets for India A on day one