Australian men have won the World Cup nine times since the tournament's inception in 1995 and women have bagged the title eight consecutive times since 1998.

Dubai: Former India cricketer Sandeep Patil, brand ambassador of the 10th edition of World Indoor Cricket Federation World Cup, is hoping the tournament gets recognition from the BCCI in the future. The world’s richest cricket board has not been attracted by the tournament so far. The tournament starts here on Saturday with India also sending a team. All the competing countries are aiming to end Australia’s dominance in the men and women events. Australian men have won the World Cup nine times since the tournament’s inception in 1995 and women have bagged the title eight consecutive times since 1998. Surprisingly, there is not enough awareness about the tournament in a cricket-obsessed country like India. READ: BCCI finance committee members miffed at COA, CEO

“Until and unless the awareness comes and also the sponsors along with broadcasters come, it is difficult. You have to take this game not only to India but all the cricket loving countries. It’s a new format and it will take time,” Patil, a part of India’s 1983 World Cup triumph, said. Though not played by professionals from conventional cricket, the tournament has been there for the past two decades.

“I am glad that I am associated with this as a brand ambassador. I consider this as a privilege to be part of this project and I totally support this. It’s a great opportunity to make a great statement and though Indian indoor team (indoor world cup team) has not been backed by BCCI, I am sure in the future the board will look into it. BCCI is (currently) busy handling their own issues and problems, but I thank all the sponsors,” Patil said on the eve of the tournament.

After representing India, Patil has headed the National Cricket Academy (NCA) in Bengaluru before serving as chief of the senior selection committee from 2012 to 2016. The event at InSportz Club will see hosts UAE, India, Australia, England, New Zealand, South Africa, Sri Lanka, Singapore and Malaysia compete for titles in the men’s, women’s, Under-21 men s and U-21 women’s categories. 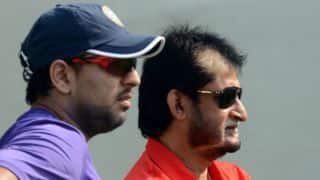