Mumbai are at 23 for two after three overs against Punjab in the IPL 2014.

Mumbai Indians (MI) are at 23 for two after three overs against Kings XI Punjab (KXIP) in the Indian Premier League (IPL) 2014. CM Gautam is batting on eight and Rohit Sharma is on zero. Mumbai are chasing a 169-run target in Match 22 of IPL 7. Ben Dunk was the first batsman dismissed by Sandeep Sharma. He fell in the first over. Ambati Rayudu was also dismissed by Sandeep in the third over.

CM Gautam and Ben Dunk began the run-chase for Mumbai. Sandeep Sharma, who has been impressive in the last two matches, opened the bowling for Punjab. The first delivery was full outside off-stump and Dunk played a cover drive for a four. But Sandeep came back to dismiss Dunk for five runs in the first over itself. He bowled a good length delivery and the ball swung away. Dunk was late in his shot and edged the ball to Wriddhiman Saha, who took an acrobatic catch to his left.

Punjab could have got Gautam in the second over, but Akshar Patel dropped a tough chance. Lakshmipathy Balaji angled one into the pads and Gautam top-edged a flick high in the air over wide mid-off. Akshar ran backwards and got his hands on the ball, but could not hold onto it. Ambati Rayudu then hit a four slightly in the air through mid-on. Balaji then found the outside edge of Rayudu’s bat, but the ball went in-between first and second-slip for consecutive fours.

Sandeep bowled one on the stumps and Gautam moved across and scooped the ball over shot fine-leg for a four. Sandeep then darted one in and struck Rayudu’s pads and appealed. The umpire raised his finger and Rayudu departed for eight.

Earlier, Kings XI Punjab captain George Bailey won the toss and elected to bat. Punjab posted a challenging 168 for five in their 20 overs. Wriddhiman Saha top-scored with an unbeaten 59 off 47 deliveries with four fours and three sixes. Glenn Maxwell struck a 27-ball 45 with five fours and two sixes. Harbhajan Singh took two wickets for 34 deliveries. Corey Anderson and Lasith Malinga took one wicket-each. Zaheer Khan injured his shoulder while bowling the 19th over of the innings. 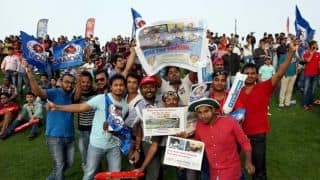