Sri Lanka star Kumar Sangakkara called on his side to find "new ways of winning Tests" after his century in the drawn finale against England failed to prevent a 1-0 series loss. 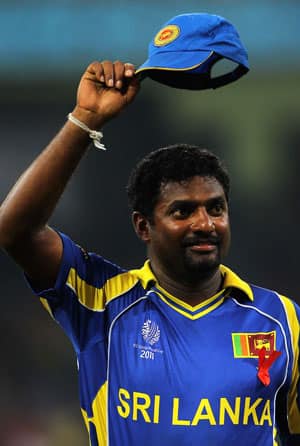 Sri Lanka star Kumar Sangakkara called on his side to find “new ways of winning Tests” after his century in the drawn finale against England failed to prevent a 1-0 series loss.

Sangakkara’s 119, together with 87 not out from Thilan Samaraweera, helped Sri Lanka defy England on the last day of the first Test ever staged at Hampshire’s Rose Bowl ground before rain, which blighted this three-match series, poured down after tea to seal a draw.

England took the series after dismissing Sri Lanka for just 82 inside 25 overs in an innings and 14-run first Test win in Cardiff.

This was the eighth successive winless Test Sri Lanka had played since the retirement of off-spin great Muttiah Muralitharan, who bowed out with a world record 800 Test wickets.

Although their batting failed the tourists in Cardiff, of arguably greater concern was the fact their attack managed just 29 wickets in the series and rarely looked like bowling England out twice.

Even allowing for the fact so much playing time was lost to rain the lack of penetration in a Sri Lanka bowling line-up also missing retired seamers Chaminda Vaas and slingshot fast bowler Lasith Malinga was clearly evident.

“Our ambition now has to be to consolidate with the players we have, the ability we have and find new ways of winning Test matches,” Sangakkara told reporters after stumps here on Monday.

“We don’t have Muralitharan any more, we don’t have Vaas. For us to win, we have to find different avenues. That’s the thing for us. Those are the questions we need to answer in the months ahead. Our bowlers try their hearts out, there’s a lot of effort, but the key is to be patient.

“To win a Test match, you need to take 20 wickets. That’s going to be the key to us going forward,” added Sangakkara, whose century was his first Test ton in England.

Sangakkara, who stepped down as captain after Sri Lanka’s World Cup final defeat by India in Mumbai in April, led the side at the Rose Bowl in the absence of new skipper Tillakaratne Dilshan, out with a broken thumb suffered while making 193 in the drawn second Test at Lord’s.

But Sangakkara said he expected the dynamic opener to be fit to take up the reins again for the forthcoming limited overs internationals against England, starting with a Twenty20 match in Bristol on Saturday that is the curtain-raiser to five one-day internationals.

“I think Dilshan will be fine,” said Sangakkara, who led Sri Lanka to a 10-wicket World Cup quarter-final thrashing of England.

“The way he is batting, I think he’ll be again the key factor for us in winning the ODI series. For him to be back leading us on the field will be good for all of us and Dilshan.”