Sanju Samson was the first wicket to fall.

Ravi Bopara struck in his very first over as he removed Sanju Samson for 26, as Naman Ojha took an amazing catch to dismiss the Rajasthan Royals’ batsman in the Indian Premier League (IPL) 2015 Match 11.  Live Blog: Sunrisers Hyderabad vs Rajasthan Royals

Rahane and Samson opened the batting for Rajasthan Royals and made steady progress. Rahane did not take much time to open his account and straight away went after the bowlers. Sunrisers Hyderabad pacer Trent Boult trapped Rahane leg before but umpire signaled it as not out. The replays showed Rahane plumb. Boult looked grumpy and was seen later on speaking to Dale Steyn at the sidelines. Bhuvneshwar Kumar and Boult bowled two overs each, before Bhuvneshwar was replaced by Praveen Kumar. Things went a little slow as RR reached 27 for the loss of no wickets at the end of five wickets. However, Bhuvneshwar switched ends and replaced Boult. Praveen Kumar bowled some good bowls but Sanju Samson lofted one for four on long on. There was a chance of dismissal but KL Rahul could never reach on time to take the catch. Few deliveries later Samson edged one and it ran away for four. Live Blog: Sunrisers Hyderabad vs Rajasthan Royals 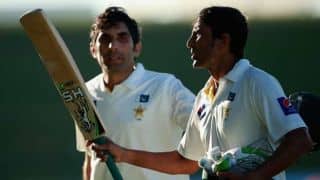 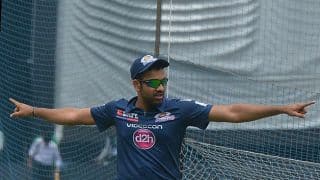