Sanju Samson has always been considered as a bright prospect but he has not been able to break into the Indian team and the Kerala wicket-keeper batsman Friday said instead of feeling frustrated he would work harder to earn a spot for himself.

Sanju Samson has always been considered as a bright prospect but he has not been able to break into the Indian team and the Kerala wicket-keeper batsman Friday said instead of feeling frustrated he would work harder to earn a spot for himself.

Samson, who has played just one T20 International for India against Zimbabwe in 2015, has been one of consistent performers with the bat in this IPL with 337 runs from 11 games that included a century and a half-century.

Legends like Brian Lara have found it difficult to understand why a talented player like Samson has not even been considered in India’s World Cup probables.

“It feels really great when legends like Lara talk highly of you. It boosts your confidence. I am very confident and happy the way I have been playing. But I am excitingly waiting for my opportunity to play for India,” the Rajasthan Royals player said ahead of his team’s last IPL league game against Delhi Capitals here Saturday.

“There is no point in getting frustrated. You can use it as a motivation and push more. It’s not easy to get into the Indian team. You need to work hard and earn that spot.”

Insisting that failure is the secret of success, Samson said he has gone through many tough phases in his career which only made him a better, determined cricketer.

“If you talk about my career or anyone’s career, there are definitely ups and downs. Going through such phases I feel is very lucky because when you go down then only you will know how to climb up.

“I am lucky that I have gone down many times in my career. I’m happy to have all these experiences. To enter the Indian team you need to know how to make a comeback, you need to be strong enough and you only get strong when you fail. I failed a lot of times and now I am strong enough to play for India,” he said.

Steve Smith has flown back to Australia to prepare for the World Cup but Samson said his team has good bench strength. Ajinkya Rahane will lead the Royals on Saturday.

“Definitely, it (Smith’s departure) is a great loss. First Jos Buttler, Ben Stokes and now Smith but we knew this before the tournament. We have enough bench strength to cover the losses,” Samson said.

The Royals are mathematically still in the play-off hunt with 11 points from 13 games but to progress any further they will first have to win against Delhi Capitals and then hope for favourable results from the other remaining league games.

A win on Saturday might just not be enough for Rajasthan to sneak through but Samson does not want to think on those lines.

“It is very tough for us and it has been tough for us for the last 5 matches. But the approach has been the same, to win and it is not going to be any different tomorrow. We will be keeping things simple, just go out there and express ourselves,” he said.

“The plan is to win the IPL. We know it’s very tough for us now but we need to win this match and be positive. We can’t play thinking that it is our last match. We still want to feel that we can still win the Cup.” PTI SSC 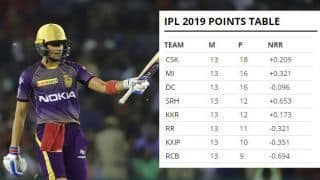