Samson was selected earlier this month for the ODI team as a wicketkeeper-batsman.

The family of Indian cricket’s newest player Sanju Samson on Monday said the opportunity for the 19-year-old to play for the national team was a “dream come true”.

Sanju – who was earlier this month selected for the ODI team as a wicketkeeper-batsman – left the coastal town of Vizhinjam for Mumbai en route to England.

Sanju’s parents and his brother drove to their family parish church and after a few minutes of silent prayer, the family reached the airport. Dressed in a bermuda and a cap and carrying a bag, the cricketer smiled as he came out of the car and was greeted by media men. Asked for a comment, the shy and reticent Sanju said: “I am thankful to all.”

He gave his family a hug, put his baggage in a trolley and went into the departure lounge. Sanju’s father Samson Viswanath is a former Delhi Police officer who took voluntary retirement to take forward his two sons’ cricketing ambitions.

“This is a dream come true for us and I don’t think I need anything more,” Viswanath told IANS. Asked if Sanju saw the Indian Test team being defeated by England, Viswanath said his son gets very little time to watch TV as he is busy practising.

Asked if he gave any advice to his son, he said: “The only thing I told him was to be modest and humble and when in doubt either ask his seniors or us.” When IANS pointed out that the chances of Sanju actually getting a game was less as the Indian captain dons the gloves, pat came the reply: “Oh my God, no, never. I want my son to play under MS Dhoni and we do not want a place in the first XI without Dhoni.”

“My son, apart from being a batsman, is also a good fielder. We leave everything to god, who has taken him this far and will take him forward too,” Viswanath said. Sanju – who is a second-year degree student at the Mar Ivanios College in the Kerala capital – became the fourth cricketer from the state to be named in the national squad.

The other players from Kerala who have represented India in the past are Tinu Yohanan, Abey Kuruvilla and now disgraced S. Sreesanth. Chief Minister Oommen Chandy and his cabinet colleagues also visited the Samson house to congratulate him. 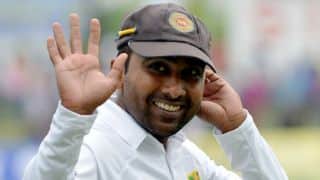