New Delhi: Cricket is a lucrative career opportunity, with big money and lots of fame. Usually, every cricketer dream of his kid following his footsteps and becoming a cricketer, however, former Pakistan skipper Sarfaraz Ahmed has other ideas. Sarfaraz once revealed that he faced endured a lot of things as a cricketer and he doesn’t want Abdullah to face them.

Notably, Sarfaraz was mercilessly trolled and abused on social media after Pakistan’s crushing defeat to India in the 2019 World Cup. Sarfaraz was caught yawning during the high voltage match after which he came on the radar of fans who slammed him for not taking his profession seriously. This was despite him leading Pakistan to a win in the Champions Trophy 2017, beating India in the final.

“My son Abdullah is interested in cricket but I don’t want him to become a cricketer,” he had told ARY Digital’s Shaan Sehwar program.

On the other hand, Sarfaraz’s son has a great interest in cricket and wants to be a fast bowler. A video is going viral on social media where Sarfaraz Ahmed is clean bowled by his son. Abdullah’s bowling has been praised by many former Pakistan cricketers, including Mohammad Amir, who feels that Abdullah has a bright future in cricket.

Meanwhile, things were not quite the same for Sarfaraz after the 2019 World Cup. The rise of Mohammad Rizwan meant that Sarfaraz lost his place in the Pakistan team. The wicketkeeper-batter last represented Pakistan against Bangladesh in November 2021 in a T20I game. 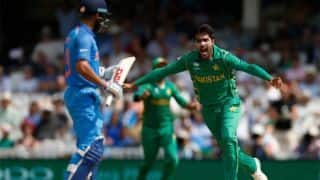