The Mumbai batsman brought up his 250 with a six and reached 300 with a maximum as well. Mumbai’s Sarfaraz Khan slammed his maiden triple ton on Wednesday in a Round 6 Group A and B Ranji Trophy game against Uttar Pradesh at the Wankhede Stadium. The 22-year old also did something former India cricketer Virender Sehwag is known for.

Sehwag was known for reaching milestones with a six. He had done it against Pakistan’s Saqlain Mushtaq at Multan in 2004 to reach a triple hundred and Khan did something similar.

The Mumbai batsman brought up his 250 with a six and reached 300 with a maximum as well.

He was on 295* when his former teammate Rinku Singh was bowling. It was an over-pitched ball from round the wicket and Khan went for the classical slog and connected it successfully. After the ball cleared the ropes an elated Khan was on his knees in enjoying the moment.

Here is the six:

The match ended in a draw helping Mumbai take three points from the game courtesy the lead. Uttar Pradesh had scored 625 for five in the first innings.

Mumbai found themselves reeling at 128 for four and that is when Sarfaraz Khan joined Siddesh Lad and the two stitched a 200-run stand to get Mumbai back on track.

His triple century is only the third by a first-class batsman while batting at No 6. Among the eight triple centuries made by Mumbai batsmen in Ranji Trophy games, he is the seventh to have done it. Only Wasim Jaffer has done it twice.

His 301* is now the second-highest score in first-class cricket while batting at number six with the highest being Karun Nair’s 328 in the 2014/15 Ranji Trophy final also at the Wankhede Stadium. 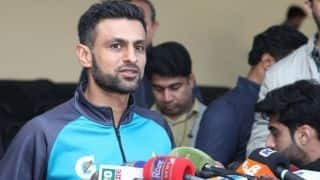