The rising star of Indian cricket will play in the Vijay Hazare trophy after returning from the world cup.

Sarfaraz Khan, the India under-19 star has been included in the Mumbai team for the Vijay Hazare Trophy 2013-14. Sarfaraz will return to India from the United Arab Emirates (UAE) on February 28 after participating in the ICC Under-19 World Cup 2014.

Mumbai lost the contest against Baroda by 44 runs on Thursday and have called up Sarfaraz to strengthen their batting. With more seniors in the side, it would be interesting if Sarfaraz gets a game.

During the ongoing Under-19 World Cup in the UAE, where India finished in the fifth spot, Sarfaraz was one of the stars to emerge with power packed performances.

The Mumbai Cricket Association (MCA) said in its press release that Sarfaraz has been included for the matches scheduled on March 2 and 3. 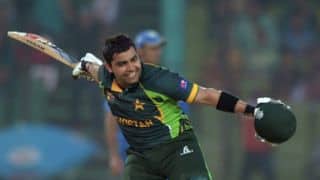