Sri Lanka became the first side to defeat Pakistan in a Test series in UAE.

Pakistan lost their first Test series in UAE after going 0-2 down to Sri Lanka in the just-concluded two-Test series. Needless to say, skipper Sarfraz Ahmed was jolted after the setback. This was his debut series as Test skipper after the retirement of Misbah-ul-Haq. Sarfraz accepted that Sri Lanka were the better side, and reckoned Test captaincy to be challenging as game changes every session.

Asked if Pakistan took Sri Lanka lightly ahead of the Test series, Sarfraz told, “No, not at all. We played a Test series after quite a while and we prepared well for it. We didn’t play well, which is why we lost. We didn’t play good cricket. Sri Lanka played much better than us. Our batting was a disappointment as no one was able to play for long and that cost us.”

Pakistan were in the game on Day Five with only 119 runs remaining and 5 wickets in hand. Sarfraz relieved the team strategy, “The thinking this morning when we came into the ground was to just play positive cricket, to rotate the strike, but unfortunately we didn’t get that going and that is why we lost.”

Sarfraz also defended the demotion of Azhar Ali at No. 3. He added, “I don’t think we faced difficulties because of the openers. Both openers gave us a good start in the first match but the thing is we couldn’t convert those scores. Our plan was to push Azhar to number three as he has had success there as well. Azhar had a great year as an opener, but we felt we need to strengthen our middle order. This series, we made fifties, but we didn’t convert them and we missed big partnerships. That is why we lost.”

On his first stint as skipper in whites, Sarfraz stated, “I have got to learn a lot. We made many mistakes in the series. This was my first series as captain and it was pretty tough. Captaincy is very different in Tests – as things changes session by session. The kind of knock Asad played, if we had got that in the last game, or in the first innings here, then we could’ve got out of it. I learnt a fair bit and I hope that whatever the next series is, we’ll try and improve on these.”

After the Test series whitewash, Pakistan will play Sri Lanka in five ODIs. The series opener will be played on October 13. Pakistan have tasted success in shorter formats under Sarfraz and a confident skipper told, “Obviously, when you have a first Test series as captain, and you lose it, pressure will be there of course. But I will try and get out of that. In ODIs our team is balanced and record is very good. We will have some senior players returning and I hope we’ll play better cricket there.” 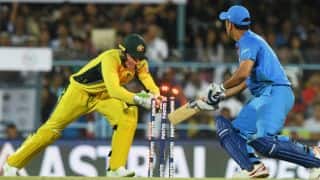