Pakistan spinners had telling role to play in the UAE against Australia four years ago with Yasir taking 12 and left-arm spinner Zulfiqar Babar claiming 14 wickets in their team s 2-0 series win.

“When we played Australia in 2014 we played some attacking cricket,” said Sarfraz, adding, Yasir is our main bowler so we will want him to attack and get us wickets to win the series. But similarly we will not put extra pressure on him and will not want him to go in a defensive mode so other bowlers will have to support him.”

Pakistan spinners had telling role to play in the UAE against Australia four years ago with Yasir taking 12 and left-arm spinner Zulfiqar Babar claiming 14 wickets in their team s 2-0 series win.

On the other hand, Australia are struggling in the longer format having lost 12 of their 15 Tests with only two wins and one draw on tours of India (twice), one each to Sri Lanka, Bangladesh and United Arab Emirates (UAE).

Australia are further dented with the absence Steve Smith and David Warner who serving a ban for their part in the ball-tampering scandal in South Africa in March.

Apart from Yasir, Pakistan s spin attack constitute of 33-year-old off-spinner Bilal Asif who played three one-day internationals in 2015 but has yet to play a Test and leg-spinner Shadab Khan. However, Shadab will miss the first Test as he is yet to recover from a groin injury.

However, Sarfraz was quick to admit that his team will not undermine the Australia s lead spinner Nathan Lyon, who took 8/103 in the drawn tour game in Dubai earlier this week.

“We attacked him four years ago and at that time we had great batsmen in Younis Khan and Misbah-ul-Haq,” said Sarfraz of the 2014 series when Lyon got only three wickets in two Tests.

“Four years on he is a better bowler so he will be their main bowler and a challenge for us,” said Sarfraz of Lyon, who grabbed 41 wickets in six matches in India and Bangladesh last year. 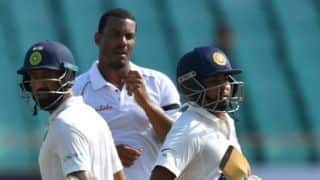 We are here to win, not to just compete: West Indies bowling coach Corey Collymore