Sarfraz Ahmed was caught at the slips by Soumya Sarkar top depart for seven.

Pakistan lost their first wicket with 36 runs on board when Sarfraz Ahmed edged Rubel Hossain to Soumya Sarkar in the slips to depart for an 11-ball seven during their second One-Day International (ODI) against Bangladesh at the Sher-e-Bangla Stadium in Mirpur on Sunday. Live Updates: Bangladesh vs Pakistan, 2nd ODI at Mirpur 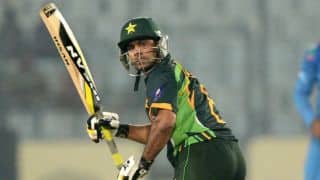