Pakistan wicketkeeper-batsman Sarfraz Ahmed is likely to return home from Australia after his mother was admitted to the Intense ICU in Karachi.

Pakistan wicketkeeper-batsman Sarfraz Ahmed is likely to return home from Australia after his mother was admitted to the Intense Care Unit (ICU) in Karachi. Pakistan team manager confirmed this news to ESPNcricinfo. Ahmed, who is also Pakistan s vice-captain, was rested from the warm-up game against Cricket Australia XI, which was played on Tuesday. While the Pakistan Cricket Board (PCB) is yet to name Ahmed’s replacement, Kamran Akmal could be in line for a recall. Incidentally, Mohammad Irfan, world s tallest fast bowler, also left the ODI squad on Monday following the demise of his mother and Junaid Khan was named replacement.

The 34-year-old was recalled in the ODI squad for the upcoming five-match series against Australia after being ignored for the series against West Indies and New Zealand. Irfan has not appeared for his country since September last year, when his body broke down and he failed to complete his quota of 10 overs in an ODI match against England in Headingley. Chief selector Inzamam-ul-Haq said Irfan was picked because of his height and since he could generate bounce and pace on the Australian pitches as seen in the World 2015. There were speculations that head coach Mickey Arthur was not happy with the fitness of Irfan after the ODI specialists landed in Australia and joined the team. 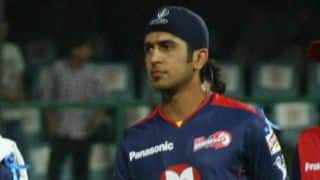