Harbhajan reveals how he slept with his medals was surprised at the sight of Sachin Tendulkar pulling off dance moves. 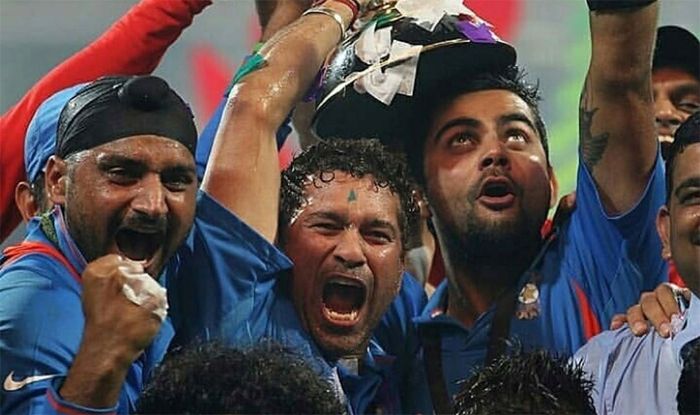 Harbhajan Singh remembers the night of April 2, 2011 like it was yesterday. Looking back at the historic night when India lifted the World Cup in front of a packed Wankhede stadium, the offspinner reveals how he slept with his medals was surprised at the sight of Sachin Tendulkar pulling off dance moves after India had secured their most memorable win.

“I remember sleeping with my medal on that night, when I woke up, I had the medal on me and it felt great. That day I saw Sachin Tendulkar dancing for the first time, for the first time he didn’t care about people around him and he was enjoying with everyone which I will always remember,” Harbhajan said on Star Sports‘ show Cricket Connected.

For Harbhajan and the rest of his teammates alike, the dream of winning the World Cup was something the team had envisioned. It was a journey that began right after India’s hurtful exit from the first round of the 2007 World Cup. From there, under MS Dhoni, India went on to achieve many glorious feats.

India won the inaugural edition of the T20 World Cup in Johannesburg the same year as their 50-over World Cup elimination. A few months later, they beat Australia in the CB series in the best of two finals by winning the first two games in Sydney and Melbourne. In 2010, India lifted the Asia Cup in for the first time since 1995, beating Sri Lanka in the final and secured a Test series win in New Zealand to be crowned the No. 1 Test side in the world. Heading into the World Cup, India were favourites and by winning the trophy not only did they live up to that tag, but also became the first country to win a World Cup at home.

“It was something that we dreamed together, it was just coming through and it was an unbelievable feeling. I still get those goosebumps when I think about those moments. Lifting the World Cup was really something special and it was probably the first time I cried in front of everyone. That feeling was overwhelming, I didn’t know how to react,” Harbhajan, who picked up nine wickets from nine matches, said.

Since, Harbhajan went on to play just three more ODI series for India, the last being in October 2015 before getting sidelined.